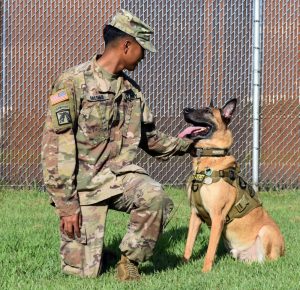 The Soldiers of the 901st Military Police Detachment (Military Working Dog) held a retirement ceremony for Sgt. 1st Class Vito here Sept. 17, praising him for his nearly nine years of dedicated service to the Army as a military working dog.

Vito, a Belgian Malinois who served as a Patrol Explosive Detector Dog and deployed to Qatar and Iraq, will spend the rest of his days at “Fort Couch”—slang for a place to relax—in Custer, South Dakota.

“He’s definitely earned it,” said Capt. Amie Young, the detachment’s commander, at the ceremony. “I’m glad that he made it back from deployment OK and he was able to make it back and get retired. He’s a very sweet dog and definitely made his mark and did his job in the Army for several years.”

Spc. Jericho Arengo, Vito’s handler for more than two years, said his stepfather and mother, the “commanders” at Vito’s new home, are adopting him, and he looks forward to seeing Vito again when he is home on leave.

Fort Couch is a coveted assignment among all military working dogs, Arengo said, including Vito. “He’s retiring, and he loves naps, and therefore a couch is a perfect place for any dog,” he said.

Vito should have plenty of years left to enjoy his retirement, Arengo said.

“As an older dog, you would think that he would slow down, and you’ll see every now and again that age is coming up to him, but there are some days where you wouldn’t think he’s 11 years old,” Arengo said. “He acts like a puppy, running around, still chasing tennis balls, sprinting as fast as he can.”

Arengo said he has enjoyed working with Vito while they were stationed together at Camp Zama, and considers himself fortunate to have deployed to Iraq with him. Unfortunately, however, Vito’s back gave out during the deployment.

“We had to come back from our deployment early, and that’s what made the vets decide to retire him,” Arengo said.

In part, the certificate read: “Sgt. 1st Class Vito’s dedication to duty and professionalism contributed significantly to the detachment’s overall success. His performance is in keeping with the finest traditions of the Military Police Corps and reflect great credit upon himself, the 901st Military Police Detachment, U.S. Army Garrison Japan and the U.S. Army.”

After he received the medal, Vito barked as everyone clapped.

Arengo, who joined the Army about three years ago and has been a military working dog handler for more than two, thanked his fellow Soldiers for their support.

“I was very fortunate for all of your advice on how to be better with Vito and also for giving me the trust with Vito in going to Iraq,” Arengo said. “I couldn’t ask for a better team.”

Sgt. 1st Class Luis Berber, the detachment’s kennel master, told the audience that Vito has had a good career in the Army, and he wishes him all the best in his remaining years.

“Thank you, Vito,” Berber said. “Thank you for all you’ve done.”