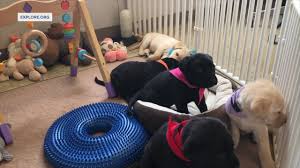 A nonprofit is providing an unusual form of therapy for those on the front lines of the coronavirus pandemic – puppy cams!

“You spend five minutes with a puppy and try not to smile,” said registered nurse Robin Lingg Lagrone.

Lingg Lagrone says watching little furballs wag their tails and prance on their paws helps her temporarily escape the darkness of the COVID-19 crisis.

“It’s just been a moment of sunlight for us pretty much all year,” she said.

To help boost her and her co-workers moods, National Jewish Health recently started airing a puppy cam from Warrior Canine Connection on www.explore.org.

“The saying is, ‘we came for the puppies but we stayed for the mission,’” said Rick Yount, founder of Warrior Canine Connection, which breeds puppies to become service dogs for veterans.

“We’re trying to just get every therapeutic drop from every puppy,” Yount said. “A lot of people have found solace and healing from watching these puppies.”

Millions of people from dozens of countries around the world are tuning into this puppy cam, which behavioral therapists say helps lower stress levels.

“You just feel that emotional and biological reaction when you see puppies,” said Patrick Griswold an associate professor with MSU Denver’s department of human services and counseling.

At first, Griswold was skeptical about what kind of impact looking at puppies online would have on someone’s well-being compared to seeing these puppies in person. After watching for himself, however, Griswold says this form of virtual animal therapy can help people better handle their emotions by releasing what he calls the love hormone.

“When humans look at their dogs, oxytocin levels rise in both the animal and in the human,” he said. “When you’re watching puppies play, it’s hard to also think about all the other stuff going on in your life.”

A much-needed emotional outlet from the daily grind of working on the front lines during the pandemic for people like Ling Lagrone.

“It’s been a really hard year and it’s just full of sadness.” she said. “It’s hard not to feel joy when you look at a puppy.”