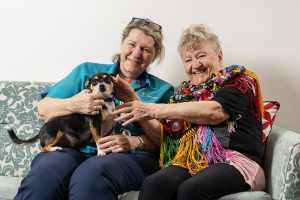 When Stanley the miniature fox terrier’s owner passed away, the little dog started a ‘paw-some’ new role – bringing puppy love to some of the Gold Coast’s oldest residents.

After Carinity Cedarbrook Diversional Therapist Julianne Staff adopted Stanley, he began visiting the aged care community at Mudgeeraba as a therapy dog. Therapy dogs help to reduce anxiety and stress and provide companionship for people of all ages. Stanley brings much joy and pleasure to the men and women living at Carinity Cedarbrook, including going for outside walks with residents and their visiting family members.

“Residents always come back with a smile on their face and say it was like taking their own dog for a walk,” Julianne says.

“The conversations they have are marvellous and very stimulating, reminiscing about their own animals.”

Residents and staff have found Stanley, who is three years old, to be “very smart and intelligent” – and they greatly enjoy seeing a ‘fur-miliar’ face around.

“Our residents get so much pleasure just seeing Stanley. Everyone who sees him immediately falls in love with him,” Julianne says.

“He loves his cuddles and so do the residents. Stanley is very loyal and has gotten to know our residents well.”

Stanley is one of several dogs which visit Carinity residential aged care communities and special assistance schools across Queensland, helping to comfort residents and students.

Maverick will provide the ‘paw-fect’ pick-me-up for students going through a rough patch: hugs and cuddles.

He was gifted to Carinity Education Rockhampton by Singleton dog breeder Tamaruke, which has genetically developed the breed over the past 30 years – specifically to be companion animals.

Not only will Maverick have new home at Carinity Education Rockhampton, he will visit residents of the Carinity Shalom seniors’ community and undertake other engagements in the community.

The puppy is currently undertaking six weeks of training to prepare him to work with school students and staff and other members of the Rockhampton community.

His training is being funded by a Community Recovery Challenge grant received by the school, which aids in building community capacity and resilience in the Livingstone Shire region.