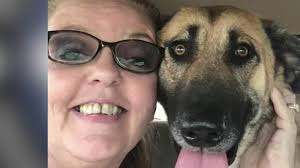 “We are an organization that rescues dogs that would otherwise be euthanized in shelters and we train them for veterans with PTSD,” Jenkins said. “When the dogs come to us, they are not trained and we have to sometimes put them through medical care but we work on matching them carefully with clients.”

Matching veterans with their dogs can be challenging, Jenkins said.

“It is up to us to make sure the dogs are assessed for service dog training which is not an easy thing to do,” Jenkins said. “That is why we started this organization.”

Jenkins learned of the need to connect veterans with service dogs after working with Animal Control Services.

“I met someone who said they had seen so many veterans bringing dogs back to the shelter because they were rescuing dogs, going to a trainer and then finding the dog wasn’t suitable,” Jenkins said. “We cut all of that out for them by assessing the dogs and placing them with the veterans. We want a forever match with the veteran’s lifestyle and disability.”

Jenkins said though they do not know the dog’s background, they pay attention to the breed’s temperament and trainability.

“We have volunteers at different shelters all around Texas and they will notify us of a dog they think may be what we are looking for. I will let them know how to assess the dog if I can’t get there myself. We see if the dog is ‘pull-worthy’ which means it can be pulled from that shelter.”

Since starting the organization, Jenkins said she has made great connections through veterans and healthcare professionals.

“PTSD is very varied with veterans,” Jenkins said. “Fear of crowds. A fear of great groups of people. A fear of loud noises. A fear of being asleep. A fear of going out the door. There are so many variations of PTSD and it is not across the board. There is also anger issues. There is so many. Each veteran has their own individual history. They have their own battles. We do not diagnose or offer therapy or advice. Our job is to train a dog to alleviate those symptoms.”

She said they look for five things in a potential service dog.

“The thing with shelter dogs is that they have a shelter way of being,” Jenkins said. “The dog may be bouncing off the walls but it could just have kennel stress. The main thing is getting the dog home. We see if the dog is friendly, does it make eye contact, does it want to be with you, does it want to please. If a dog doesn’t want to be with you or care about you, then it is not going to help your PTSD.” “We have a dog with us for two to three weeks before we start advertising it,” Jenkins said. “We bring it in our new building and train it. Then we bring the veteran in to see if it is a match. We don’t train the dog 100% before it leaves for one good reason and that is because every veteran has a different need for a dog. We may have one who has lost their limb or someone who has issues with being outside or forgetful or needing to be reminded to take their medication. We have to take that into consideration.”

To date, Jenkins said they have matched at least 300 shelter dogs with veterans or with people with private disabilities.

“We mostly get asked for pit bulls, Rottweilers, or German Shepherds. When you have PTSD and want people to stay away from you especially when you are in large crowds, having a pit bull or a bully breed is going to keep people back from you,” Jenkins said. “We love doing pit bulls because they are the most underestimated breed there is. They are fantastic dogs if given the chance. They are not as vicious or as nasty as everyone thinks that they are and they can really make the most amazing service dogs.”

Jenkins’s passion for dogs started when she was a little girl growing up in England.

“I started volunteering at the local animal shelter and would walk four miles every Sunday to be there,” Jenkins said. “I would go up and a help bath them and put little red ribbons around their necks and do things to get them adopted and it was just a fulfillment that I absolutely loved to do.”

She got that passion from her father, who passed away in 2018.

“He was very close to me,” Jenkins said. “He taught me a lot about animals and about compassion for animals. He donated a lot toward the rescue. It was because of him, we are now in a new training building. Before then, we used to train in the house in the kitchen. Literally in the kitchen and in the dining room and in anywhere we could and now we got this building. So yes, all of this is in his honor.”

When she left school, Jenkins would work for the shelter with trainers and veterinarians while training family and friends’ dogs. She also met the American love of her life.

“I married my husband after meeting him in a very traditional way … online,” Jenkins joked. “When I married my husband in 2008 I wanted to carry on working with dogs so when I moved to the United States, originally I started fostering dogs with Animal Control Services. That is when I was told about the need for veterans to have dogs that were being assessed. I started In Dog We Trust as a rescue but slowly we started to evolve with the demand we had from veterans coming to us, being recommended by the VA and Veterans Associations and the Alzheimers Associations. We went from being a rescue to a rescue training organization.”

She said the reward is beyond priceless.

“When it move you the most is when you have someone that you’ve placed a German Shepherd with and it was going to be killed,” Jenkins said through tears. “And the veteran sends a picture of him and how it is helping him with his seizures, and he send you a message saying thank you. It is the most wonderful thing. I worked with a Navy veteran who lost one of his legs and I trained one of his dogs, RJ, to work with his wheelchair. I still get pictures of him with RJ. They have traveled all over the place.”

Jenkins said she doesn’t do it to get credit.

“I don’t do it for the thanks,” Jenkins said. “I do it because I have saved the life of a dog that otherwise would have been killed and I do it to give back to my country that has given me the grace to live here. It is my way of paying back to the country and saying thank you to veterans that allow me that freedom. I have met so many Marines, Air Force, Army, all stations and all ranks and have made so many friends and it is a wonderful thing.”

She added she hopes people will become better informed when it comes down to service animals.

“The main obstacle is the misinformation and education lacking for service dogs and service dog training,” Jenkins said. “We try to educate people for example, during restaurant access. There is not enough education out there about the rights for service dogs. Many police do not know the law and when the veteran calls on them for help, the officer ends up siding with the restaurant. The main issue I would say is the service dog registries which are fake and not real nor is it associated with anything. When you have a veteran spending a lot of time training their dog and someone in the store has an out-of-control dog but they printed off a certificate online saying they are a service animal. Then the store officials are looking at the veterans passing judgements on their animals. The lows would be the lack of education out there for service dogs and veterans for their rights to be in public with a veteran.”

Things have slowed down for the organization after her husband was diagnosed with stage 4 prostate cancer last year. The pandemic has also impacted their operations.

“It is a rough ride but by October, we are going to be launching the organization in a different way bringing in more volunteer trainers to do what I do,” Jenkins said. “We just got to keep going and looking for what we have today. Today is all you have. Today is all anybody has. If you are thinking and worried about tomorrow, then you are wasting today.”

Jenkins said they are always looking for volunteers and fosters to take care of dogs while they are searching for a veteran. She said people can also donate and learn what they do at shelters to assess dogs. Jenkins added if you can’t donate funds, send collars and leashes.