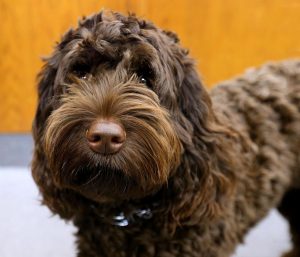 Howard County Superior Court II Judge Brant Parry stood in his courtroom last week and looked around like he had lost something.

“You want to see her?” he asked, still looking around the mostly empty room.

A few moments later, a brown fluff of fur came bounding through an open back door, prompting instant smiles on all the faces sitting nearby.

Her name’s Kadence, and she’s an 11-month-old chocolate Labradoodle.

But she’s no ordinary dog, Parry is quick to point out.

Purchased through a grant from the state of Indiana, Kadence — KD for short — is the new therapy dog for Howard County’s problem solving courts like Veterans Court and Mental Health Court.

She also helps the probation department and juvenile programs too.

A dog of many hats, Parry noted.

“I’ve seen for a long time how you have individual service dogs that you use with people or just general therapy dogs that are in facilities,” Parry said while sitting in his office before a recent gathering of Veterans Court. “So I started mulling that in my head, and I thought it’d be a good idea. Between Veterans Court and Mental Health Court, we have a lot of people that suffer from anxiety, PTSD, those types of things.

“And when they have to come into court or meet with their probation officer on a regular basis, it causes them great stress and anxiety,” he continued. “… So we decided to apply for a grant and purchase a dog that could be trained, not for one individual purpose but for an entire group of people.”

So last February, Parry and a few others enlisted the help of Darren Petty, owner and operator of Indianapolis-based Indiana Working Dogs.

Petty even drove to Sheridan to handpick Kadence from the rest of her litter when she was just 8-weeks-old.

“One of the things when you’re picking out something for a project like this is that you’re trying to minimize the chance that the dog won’t work out,” Petty said during a telephone interview with the Tribune. “Not every dog can be a therapy dog. Not every dog can be a service dog. So one of the things I looked at was her puppy temperament testing results. And she did very well. … She’s got a great personality.”

Petty has seen that personality many times over the past few months too, as he’s been the dog’s primary trainer.

Kadence even spent three consecutive weeks recently with Petty at his facility down in Indianapolis, learning advanced obedience skills that will prepare her for upcoming therapy dog certification testing.

“COVID has stopped it [the therapy dog certification testing], and we’re waiting for that to open back up,” Petty said. “So right now, it’s just really important that she gets lots of practice just getting comfortable in the courtroom and with people being around her.”

And Kadence — who stays with Parry’s family — genuinely loves being around people too.

“I take her to work every day,” Parry said. “… And when I get ready to leave in the morning, she knows she’s going to work. She loves it. I let her out and put her leash on, and she sits by the door ready to go.”

Parry added that the people at the courthouse — specifically those in his problem-solving courts — are just as fond of Kadence.

“I think the benefits of having her here are endless,” he said. “The idea is to just kind of take the anxiety levels down a couple notches that they would normally feel when they have to come to the courthouse and meet with a probation officer or come to court and meet with a judge. I think coming here and having the friend who doesn’t ask for anything from them and just wants to say hello to them and is just excited to see them is great.

“If you can have that, ‘OK, I have to go to the courthouse because I have to see my probation officer and check in, but KD is going to be there while I’m talking to my case manager,’ it makes it easier,” Parry added. “I think having someone that doesn’t want anything from you other than to just be your friend and show love is important, whether it’s a human or man’s best friend.”

Veterans Court Coordinator Richard Cotterell agreed with Parry, noting that even the dog’s name was carefully picked out for her overall duty.

“Cadence has to do with rhythm,” he said. “It’s a military term as well, and we put it out there on social media for some folks to come up with a name for her. Someone submitted Kadence, with a K. And just like cadence has to do with rhythm, our veterans are out of rhythm right now because of some of the issues they’re facing. And Kadence is part of trying to help them get back into that rhythm. She’s part of that treatment.”