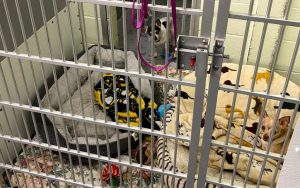 The sound of paws and claws precedes Isabella’s entrance. She bursts out of the Worcester Animal Rescue League’s front door, dragging Sara McClure, WARL’s dog program coordinator, behind her. McClure has two hands on Izzy’s bright red leash as the pit bull mix comes barreling into the parking lot. McClure motions for me to take a few steps back to give Izzy a little bit of space; she can be uneasy around strangers.

Izzy is alert but curious as she runs circles around McClure, investigating all the new sights and smells. McClure watches proudly as Izzy prances around the parking lot.

“I spend more time with these dogs than I do my own,” she says.

Izzy is a three-year-old barrel-chested pit bull mix with squat, wide-set legs. A splash of white fur coats her chest, neck and the tips of three paws, standing out brightly against the rest of her dark fur. Ears that flop asymmetrically frame dark intelligent eyes. The slash of a scar runs across the bridge of Izzy’s nose.

Izzy pulls close to me as I show her the treats in my hand.

“If she sees you have cookies, she’ll do anything you want,” McClure says. Izzy enthusiastically snatches the food from my hand. McClure showers her with praise. McClure says she is impressed with Izzy’s reaction to me, as this would not have been how she behaved several months ago.

“You have teeth in there,” I say laughing, as Izzy grabs the last treat off my fingers.

It takes Izzy a second to refocus on McClure.

“Sit. Down. Rollover,” McClure says. Izzy obliges and flails over onto her back before hopping to her feet for a treat. She sits easily in front of McClure, tongue hanging out of her mouth. McClure is one of Izzy’s favorite people.

Izzy has been with WARL since February, meaning she is coming up on almost nine months at the shelter. She was brought in as a pregnant stray. The person who brought her in said that they had just found her a few weeks prior, but McClure is skeptical of that story.

“Someone taught her to rollover before she came to us. She was somebody’s pet,” McClure says. All of Izzy’s puppies were quickly adopted out to loving families, leaving her in need of a home.

“She’s come a long way. When she first arrived, she was difficult in the kennel. Did a lot of growling, a lot of lunging,” McClure says. “Two months ago she wouldn’t have behaved like this.”

Whatever happened to Izzy before coming to WARL left her fearful and distrusting of people. But, McClure and Izzy’s other favorite staff members have been working hard with her to show her that the world isn’t as scary as she thinks. She has settled in reasonably well to WARL’s routine while she waits for her forever home.

McClure and the rest of the staff arrive at 8 a.m., and Izzy is always up and waiting when the lights flick on. Izzy knows that means food and pets.

“I say good morning to all the dogs, but especially to the Izzy’s of the group. Because they’ve been here so long, they’re essentially like my dogs,” McClure says. Izzy’s extended stay with WARL, and the amount of time McClure has spent working with her, has given McClure a special fondness for Izzy. After breakfast and a trip to the bathroom outside, Izzy is brought back to her kennel. Every time a staff member enters the kennels, they are met with enthusiastic barking, Izzy’s voice included.

The rest of her day is broken up between time spent in the kennel and walks by volunteers and staff. Izzy is a puller and incredibly high-energy, so the experienced dog walkers have the pleasure of taking her out. McClure calls her a little Energizer Bunny, among other nicknames.

“She’s got more energy than I can handle,” McClure says with a laugh. Then comes dinner, the bathroom, tuck-ins, and goodnights. The lights turn out at 5 p.m. as the staff heads for home. Izzy wakes up the next morning to do the same routine over again.

“My main focus is taking in dog surrenders, handling the intake of strays, handling the adoptions, and making sure the dogs have everything they need while they’re here,” McClure says. Her office has a dog bed, a shelf stuffed with dog toys, a rack of leashes, and tons of dog pictures. “Every dog is an individual, some more than others. So I make sure that they have enrichment, their walks, and toys. I get to know their personalities and try to fit them with the best possible adopters.”

Many of the adoptable dogs at WARL have appointments throughout the day to meet with potential adopters. Izzy doesn’t have any appointments on the books at the moment, so her schedule remains the same. So, today’s trip to the parking lot is something special. Part of the lack of interest in Izzy is her breed. Pit bull-type dogs are heavily stigmatized, which can make adopting them out hard. Izzy also has particular needs when it comes to a forever home, so McClure has to be pickier when looking at adoption applications for her.

“She would be a great hiker or runner,” McClure says. Izzy watches the road, then the trees off to the side of the parking lot, and then the road again. Her nose twitches and her tail wags.

“She probably didn’t have the best first three years of her life,” McClure adds. “Which makes it all that much more important that she have a great rest of her life.”

Izzy remains cheerful and excited to play, despite her long months at WARL. Her daily life will continue to follow the same routine as McClure strives to make her stay as comfortable and stress free as possible. McClure and the staff adore Izzy but will be elated when the right family finally comes along.

“She’s a great dog,” McClure says. “She’s going to make someone very happy. We just have to wait for the right person.”