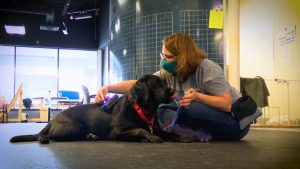 One special group in Charlottesville is helping to change lives one canine at a time. SDV starts training puppies and then places the dogs with those in need when the dogs are about 2 years old.

After seven years in the Army, Michelle says adjusting back to civilian life has not been easy.  She tells 8 News, “For me, it’s like climbing Mount Everest every time I leave my house.”

Michelle was having trouble going out in public. Eventually, she was diagnosed with PTSD.

Michelle, like many veterans, has gone through a list of treatments and therapies to no avail. But then she learned about Service Dogs of Virginia.  After about a year-long wait, she was paired with Dottie, a black Labrador retriever.

“My hope for having Dottie is that I am finally able to return to a normal life again. That I am able to have a sense of normalcy back in my life,” Michelle said.

But getting a service dog like Dottie is easier said than done. It costs approximately $40,000 over a two-year period to raise, train and place a successful service dog with a person in need. That cost is never passed on to the new owner.

“I do everything I can to raise funds. I do not pass on that cost to our clients. I write grants. We have individual donors. I get corporate sponsorships,” said Sally Day, Service Dogs of Virginia Director of Development.

Day says fundraising has been difficult, due to the coronavirus pandemic, but the organization is determined to continue the good work that they’ve been doing for over the past 10 years. She says “When the organizations began, they started with a waiting list because there was so much need.”

Michelle says that she hopes that by sharing her story other veterans will be inspired to ask for help. She reminds people that, “Not all wounds are visible.”