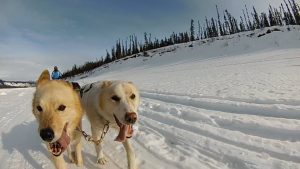 Northern Virginia is nearly as far as you can get in the United States from the Northern Lights of Alaska, but Comet and Swannie don’t appear to mind swapping the Wrangell Mountains for the Shenandoah Mountains. That’s because Denise Lawson, who worked to bring them more than 4,000 miles from where they were living near the Yukon border to living near the District of Columbia border, is helping them find forever homes where they can do what so many other individuals yearn to do after a taxing career—enjoy their retirement.

In 2018, Lawson, and her boyfriend, Gordon Smith, visited a friend who worked in the dog mushing trade. They learned how to work with dogs on their own sleds and rely on the canines as teammates more than pets. Along the way, they fell in love with one of their working dogs, Black Bear. At the end of the mush season, Black Bear retired and Lawson’s friend helped get Black Bear home to Springfield.

Since then, Lawson and Smith have helped bring more than 20 retired sled dogs from Alaska (and one from Minnesota) to Virginia to find forever homes. To help pay for all the travel and veterinary costs, Lawson launched a series of books about Black Bear’s adventures. There are many misconceptions about how working dogs in Alaska are treated, and it’s part of Lawson’s mission to educate people about the healthy life most working dogs live in the Northwest territories in her books and talks. Coronavirus restrictions have limited the number of presentations and talks that Lawson and her dogs are able to share with the public, so we conducted a question and answer session with her to share her message from a socially-safe distance.

I have a neighbor who works as a mushing guide in the winter months in Alaska. She convinced me to go on a dog sledding expedition at Bush Alaska Expeditions several miles outside the small town of Eagle, Alaska, along the Yukon River near the border of Canada. This is a very remote part of Alaska that is only accessible in the winter by flying on the mail plane. Our expedition took us over jumble ice and through narrow wooded trails in a wilderness with no roads. Sled dogs are an essential method of transportation in this part of Alaska. My boyfriend, Gordon, and I had the unique opportunity to learn how to harness and mush my own dog team. We had an amazing adventure and developed an amazing bond with the people and their dogs.  It’s hard to describe the bond you develop with each dog while out on the trail for multiple days in the wilderness. Sled dogs have a remarkable bond with each other and their mushers and handlers.

We ended up adopting Black Bear a couple of months after this dog-sledding trip. Black Bear was a dog on Gordon’s dog team on our expedition. She is a retired Yukon Quest lead dog. We were fortunate that when Black Bear arrived in Virginia, we already knew her from Alaska. We understood the environment that she came from and knew how to help her adjust to a new life that included sidewalks and cars. For dogs who grew up in a dog yard in the wilderness, it is a big change to transition to suburban living.  I found that I kept telling the Black Bear story as she inserted herself into every conversation when walking around the neighborhood. I decided to write a children’s book called Black Bear Goes to Washington and use proceeds to help fund the transport and veterinary bills for other retired dogs from Alaska. Through the voice of Black Bear, this story conveys the essence of sled dog life in Alaska and lightheartedly suggests that we could all learn a little something from some old sled dogs. We started doing school, library, bookstore and pet store visits with the sled dogs. More people started asking about how to adopt a dog or how they could help. One book, led to another book, and another and now, there are four Black Bear books. The books are a great method of educating the public about sled dogs and are an important conversation starter in addition to being a fundraiser for helping more dogs.

We visit the wilderness bush region of Alaska each year near the town of Eagle. A lot of logistics are involved in getting the dogs out of the bush and bringing them to Virginia. The first leg of the journey for the dogs is to ride in a dog kennel on a sled being pulled by a snow machine (a snow machine is what we call a snowmobile in the lower 48) to get from the homestead to the airstrip in the town of Eagle. We fly with the dogs on the mail plane to Fairbanks. On this flight, we are able to have the dogs right next to us or right behind us in the kennel depending on the seat configuration. Once in Fairbanks, the dogs need to be taken to the vet for a check-up before flying. This vet certification has to be completed within 10 days of the flight to ensure that the dogs are in good health before they fly. The easiest and least expensive way to transport the dogs is when a passenger is flying on the same plane as an escort for the dogs. Almost all flights leaving Alaska go through Seattle, and depending on the layover time, sometimes the dogs need to be picked up in Seattle so they can get out, drink, eat something, and take a potty break. Then they must be rechecked for the connecting flight to Virginia.

Sometimes, it is necessary to fly a dog as cargo without a passenger. Since most cargo flights also require a connection, we still need to make arrangements to have a volunteer or paid service pick the dogs up in Seattle and then re-check the dogs for their next flight.  In some parts of Alaska, the temperatures in the summer can get very warm. July 2019, for example, was a very hot month in Alaska with temperatures around the town of Eagle exceeding 90 degrees. The dogs shed their heavy winter coat as the temperatures warm up even in Alaska. The Alaskan husky undercoat helps control the dog’s body temperature in both hot and cold weather. Generally, the homes of the retired dogs have air conditioning. In retirement, these dogs enjoy staying cool inside along with their new families. The dogs can still go out to walk and exercise, but as with any dog, the owner needs to ensure the dog has plenty of water and limit outside exercise during the hottest part of the day.

The mushers and families we work with in Alaska take excellent care of their dogs. I would like to clarify and say that we do not rescue dogs. We rehome dogs that are highly trained working dogs who have been loved and well-cared for. We have had the opportunity to participate in the daily care of sled dogs at the homestead where Black Bear was born.

Gordon and I also volunteered at the Eagle checkpoint for the 1,000-mile Yukon Quest race in February. We got an inside view of the amazing vet care and the dedication of the mushers to the health and well-being of the dogs—and more importantly the bond between musher and sled dog. These dogs are loved.

A lot more goes into dog care than people realize. I do an educational program that teaches kids how to think like a musher, so kids can see everything that goes into dog care and running a dog team. It is much more than just knowing the mushing commands.

Everyday revolves around dog care duties such as feeding, scooping poop, nail trimming, and health monitoring. And each dog gets “people” time and free run time. The mushers carefully plan the nutrition, exercise, and vet care for each dog. They live on a high-quality diet of salmon year-round supplemented with performance grade kibble that is far superior to most commercial dog food that the average house pet eats. The dogs are the No. 1 priority to the musher. They are an integral part of a subsistence lifestyle as they are the most reliable form of transportation. The dogs love to run, and it is hard to articulate the serene beauty of running a team of dogs on the Yukon River.

From birth, the puppies are handled a lot and get lots of love and interaction before they even start to learn mushing commands. And once you witness the bond between dog and musher, you understand something deep and special about life in the Alaskan bush. These dogs are truly family members.

Some people ask why the mushers give up some of their dogs if they are loved so much. Working dogs are a requirement for surviving in the wilderness. They give up some dogs so they don’t end up having more dogs than they can support, and so the older dogs can have a good retirement with easy access to healthcare. It can be difficult to rehome these retirees, particularly for dogs who come from the remote bush regions of Alaska. In an area where there are more dogs than people, finding a home for a dog who can’t work anymore can be hard. This is where we come into the picture. Parting is always very hard for the mushers, and saying goodbye to their dogs is a tearful time. But we always keep in touch with the mushers and the adopting families, and we share pictures and updates on how the dogs are doing in their retirement homes.