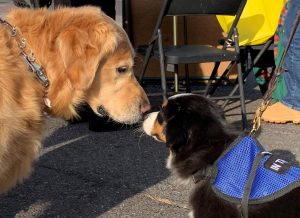 Gracie is a few-months-old Australian Shepherd and the agency’s first “peer team support K9,” according to a CPD news release.

Lt. Brittany Jenkins is currently caring for the pup as training is completed. Once Gracie is certified, her primary mission will be to reduce heightened short-term anxiety and long-term post-traumatic stress in local officers and staff.

She’ll be available full-time to police personnel, specially trained to recognize and react to high levels of stress and anxiety.

Over the past decade, suicide among law enforcement has been recognized as the top cop killer, above all other line-of-duty deaths combined, the release stated.

He knew his department would benefit greatly from having its own therapy dog and directed staff to make it happen, according to the release. However, finding the right dog did not happen quickly. Grants, shelter dogs and non-profits were explored, but none were a perfect match.

So the PD contacted Selina and Charlie Deming with Aussie Tales Farm in Marshall due to their experience with raising and training emotional support dogs. After learning about the Culpeper PD’s needs, the couple generously donated Gracie.

To ensure that she was the perfect fit, Gracie underwent genetics testing and aptitude screening. Chris Aycock with the American Society of Canine Trainers will direct her imprinting and certification process. He also trains and certifies the agency’s narcotics K9s.

Over the next year, Gracie will work on socialization and obedience standards set by the American Kennel Club. The public can expect to see her at many events and around town meeting as many new people and fellow animals as possible.

Around her first birthday, Gracie will attend specialized training to be certified as an Emotional Support Canine.

In addition to supporting local police personnel, the pup will be available during interviews with juvenile victims and those who experienced traumatic incidents. Gracie will also be a Culpeper PD ambassador at community events and schools.

Gracie is certainly expected to make a positive difference. The PD quoted American author Dean Koontz in making that point: “Petting, scratching, and cuddling a dog could be as soothing to the mind as deep meditation and almost as good for the soul as prayer.”
This past Sunday, Gracie took her first outing. To enhance socialization skills, she visited the Depot following the outdoor Stageworks production of, “Yes, Virginia.”

“She had fun meeting so many new people, bringing smiles to their faces, and experiencing new sights and smells!” according to a PD Facebook post.