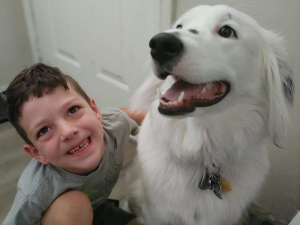 Seven years ago, Avery Edwards was born with cytomegalovirus (CMV). The virus left him with long-term challenges, including hearing impairment. At age 4 he was diagnosed with prioproception (meaning he has difficulty determining where his body is in space) and vestibular dysfunction. More recently, he received a diagnosis of autism.

“When Avery is told he has to go to the doctor he is struck with fear that sometimes we cannot get him out the door,” the family writes. “This comes from the fact that he has had six surgeries and is only 7 years old. He is also very scared to try new things because of his sensory disorders (proprioception and vestibular dysfunction). These sensory issues cause issues with balance and being able to tell where your body is in its current space.”

As his parents researched ways to help Avery, they learned the family dog, Domino, could be trained as a service dog, providing assistance with Avery’s various challenges.

Avery had already developed a strong bond with Domino. As the family began looking into local trainers that could help Domino become a service dog, they got in touch with trainer Katie Ashby of Legendary Service Dogs. Both Avery and Domino were evaluated for service work and told that they were good candidates for training. It was great news for the Edwards family—except that the training would cost $8,000, an expense not covered at all by insurance.

So in addition to her parenting responsibilities and new at-home dog-training regimen, Avery’s mom Chelsey Edwards also became a fund-raiser.

Avery’s family has tirelessly sought ways to raise money for Domino’s training. But none has gotten the results they hope for. Smiths and Walmart will not let you set up fundraisers on their property unless you’re affiliated with a larger organization, Chelsey said. They set up a fundraiser with Waffle Love in Jordan Landing, where a percentage of each order would be donated to the family when a customer mentioned the “service dog fundraiser.” But “nobody showed up.” They’ve run a similar fundraiser with Beans and Brews, where donors win gift cards but without many takers. They’ve created a GoFundMe (which to date has raised just under $400) and a Facebook page to document Domino’s training and raise funds. Donors there have given about $200. Most of what they’ve raised so far is from friends and family.

Chelsey Edwards understands why donations have been so difficult to come by. “The economy is bad; many are unemployed,” she said. “COVID has caused delayed donations.”

And though they’re grateful for each donation, they’re still far from their $8,000 goal after months of effort. “I’m not really sure how to get the word out there,” Chelsey said.

The family has foregone little luxuries like ordering out or going to a movie so that any extra funds can go toward Domino’s training. “It’s exhausting, and it’s tiring,” she said. “I just keep hoping that we’ll get a break.”

The family has proceeded with Domino’s training even though they’re thousands of dollars from their goal. He began training three months ago, and they’ll continue to pay for the courses one by one as they can afford them. The course he’s working on currently is “dog-friendly active training” and includes such fundamental skills as loose-leash walking and ignoring distractions in public places. Chelsey said, “We go [to training] once a week for an hour. We work on it at home with him and take him out four or five times a day.”

The next stage of training will help him navigate non-dog-friendly places. Then Domino will begin his service training. Boarding stays, recommended at this stage, are $1,000. From start to finish, it will take two years.

As a trained service dog, Domino will be able to assist Avery in navigating the world with hearing impairment, as well as deep pressure therapy to help with his proprioception.

Though the goal is to complete Domino’s training within two years, finances may prevent that from happening. But the Edwards family is dedicated to finishing the training no matter how long it takes.

Having Domino by his side will help Avery no matter how old he is. But at this point, “doing everyday things with [Avery] is difficult,” Chelsey said. The sooner Domino is trained, the sooner the whole family will be able to enjoy life a little bit more. “It is exhausting and discouraging that it’s not happening as fast as it would like it to. We’re just relaxed people, trying to do what we can to help our son be the best he can be.”