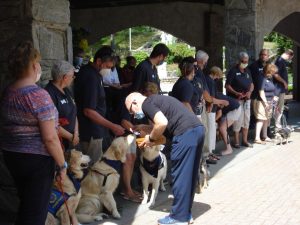 The South Attleboro Village Lions Club not only received nine new human members on Saturday afternoon, but their four-legged friends as well during a ceremony at the outdoor chapel at LaSalette Shrine.

The recent inductees of the Lions, and their canine service partners, are part of the Southeastern Massachusetts Paws of Comfort, a new branch club of the Lions and the first of its kind in the history of the non-profit organization.

During Saturday’s ceremony at the shrine, which was chosen for its accommodating outdoor venue during the COVID-19 regulations, the service dogs seemed just as excited to be a part of the clubs’ new venture as their owners.

“For us, it’s extremely exciting and fulfilling for what we see as a longtime need in our community,” said Kathy Salem, the past district governor of District 33S of Massachusetts. “There’s a real need for comfort and support for individuals of traumas, accidents, disabilities and illness.”

Salem was quick to point out that the Paws of Comfort’s services are not limited to just a single community. This new branch will be able to assist “across a whole area” of southeastern Massachusetts, from Abington through Attleboro and into Provincetown.

“Our motto is, ‘We serve,’” Salem said. “It’s a great way to continue to show that kindness matters, and as Lions, we’re here to reach out to help in whatever way we can.”

The 12 dogs, which are of various sizes and breeds, are not so much “working dogs,” but rather dogs which provide comfort to anyone who needs it.

The idea to form the unique branch came from Lions members Debbie Horner and Monique Tedino, both of whom attended a seminar to learn about forming branch specialty clubs in Cheshire, Conn.

“I think it’s a great idea to help us build and grow and to provide support to others in the other areas who need it,” Girard said. “We live in a fragmented and disjointed society, however one thing we can all depend on is a dog.”

The service dogs and their owners received prayers and a blessing from the Rev. Trey Crespo and the Rev. Flavio Gillio.

Other speakers at the event included Lions District Governor John Babb; Dr. Tony Salvatore of Bristol, Conn.; and Karen Downey, the principal of Conley Elementary School in Whitman. Both Downey and Salvatore testified to the benefits of having therapy dogs in school classrooms.