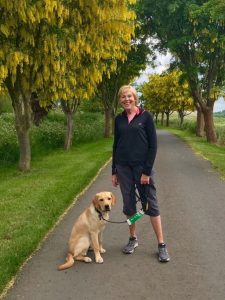 Does looking after a puppy sound like the ideal way to spend the next 12 months? Then this dog charity could have the perfect job for you.

Dogs for Good is appealing for volunteers in Coventry  for ‘puppy socialisers’ to assist in training service dogs.

The charity provides highly trained assistance dogs to people with physical disabilities and families who have a child with autism.

They are looking for Warwickshire volunteers to look after a puppy for 12 to 16 months, and getting them used to everyday situations.

The role involves taking the pooch to supermarkets, on public transport and visiting restaurants after lockdown.

Puppy socialisers are also tasked with getting the puppy used to traffic, crossing roads, visiting crowded and rural areas – plus anything else they may encounter as a working dog.

The charity is searching for people with lots of time on their hands for the next year and a half to help with this vital training. Helen Townsend from Lighthorne, Warwickshire, started as a volunteer puppy socialiser with Dogs for Good and socialised six puppies.

She went on to become a full-time puppy socialising coordinator for the charity and looks after 31 puppies and their socialisers in the West Midlands.

She said: “There’s a real sense of pride when you see your dog that you’ve had from eight weeks going out and giving somebody independence. It just makes you really, really proud.

“During the first year of a puppy’s life you have all the fun and get the chance to meet lots of new people and find out what the charity is all about.

“It’s nice to feel you are part of the bigger family at Dogs for Good and to know you are doing something worthwhile. It’s also great to see the end result.”

Helen’s children were five and seven when she began puppy socialising but she says they always understood they couldn’t keep the puppies forever.

She added: “Socialising puppies has been a good life lesson for my children. They saw they were part of a bigger picture and felt good about doing something to help people who really need an assistance dog.”

“They loved the cute puppy stage but knew they would leave one day to become working dogs.

“We’ve always had other pet dogs so when the puppies left we had other dogs which made it easier for them.”

Although no experience is necessary, puppy socialisers are required to meet the following criteria:

You have a fully-fenced safe and secure garden

Have no more than two existing pet dogs

You are able to provide the puppy with regular contact with children, other dogs and cats.

Pensioner Jean Darlaston, from Sutton Coldfield has been socialising puppies for 24 years – and has just taken on her 20th pooch.

The 73-year-old said: “The house felt empty after my children went to university so when I found out about the puppy socialiser role I thought this is something I could do.

“It gave me a purpose in life, got my brain back into action, and keeps me active.

“Handing them back is never very nice but in your head it’s never your dog and you’re doing it to help someone else who needs them much more than you do.

“I really love doing it. I feel privileged to have these gorgeous puppies and to see them being partnered with people who really benefit from having them.”

Due to current social distancing rules Dogs for Good is unable to give its usual face-to-face support but they will need to conduct a home check via video link. Telephone and online support will also be available with videos to demonstrate certain activities.