Therapy Dog In The Building 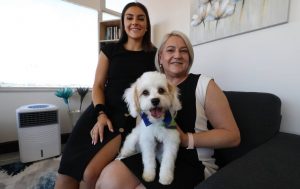 Dre is four months old and is about to undergo training with Therapy Dogs NSW in preparation for his role as the newest staff member in the Crown Street practice. Dr Olga Lavalle said the whole team and clients were excited about his arrival which has provided a positive end to a challenging year for the practice that was recently recognised for its resilience at the Illawarra Business Awards.

And by Thursday Dre had settled in so well, soaking up all the love and attention from everyone visiting the practice, that he loved having his photo taken to tell the world about his arrival and his new role.

“Therapy dogs are so important, and we’ve been doing our research for a while about bringing a dog into the practice,” she said.

“Dre will begin with us as a learner to be an official meeter and greeter in our reception area, and will then progress to being part of therapy sessions as his training continues, for those clients who would benefit from his calming presence in their sessions.”

Dr Lavalle said therapy dogs are used at schools, hospitals and aged care homes to bring comfort to those around them. But having a ‘staff member’ therapy dog at a psychology clinic is something new.

“We made the decision to get a puppy and have it trained up as a therapy dog about three months before Dre was born,” she said.

“We did a lot of research about what breed to get and the training required and were placed on a waiting list with a breeder.

“We were after a Cavoodle because they don’t shed hair which is good for people who have allergies. “They are also known for their calm nature.

“There are other psychology practices who use dogs for animal assisted therapy. Dre will progress from meeting and greeting in the waiting room to actually doing therapy in here with me.”

Dr Lavalle said there was a good reason why dogs are described as man’s best friend. They have a natural ability to spark joy and bring a sense of calm, particularly when you’re feeling anxious, stressed or depressed.

“And for people living with mental health issues – including depression, bipolar disorder, autism, ADHD, post-traumatic stress disorder and Alzheimer’s disease – therapy dogs have been proven to have a positive impact in wellbeing,” Dr Lavalle said.

Dre is already affectionately being called Doc Dre and seems to be excited about his new role too judging by the recent posts on the Dr Olga Lavalle & Associates website, Facebook and Instagram pages.

He is also having a wonderful impact on Dr Lavalle and her staff when they get to take him out for regular walks around town.

He is expected to have completed all his training by the time he turns one.