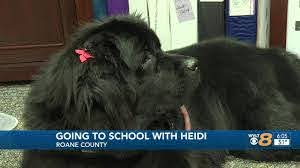 Teachers have been transformative, in the lessons they taught and words of wisdom they shared.

In this year of COVID it’s also about working with students’ emotions for those who may feel anxious.

“The best thing about having Heidi here is when you see her in the hallways it’s just like you just breathe, shoulders down and the stress begins to just fall right off,” said Elizabeth Rose, Cherokee Middle School principal.

Heidi was the newest member of the Cherokee Middle yellowjackets.

The fluffy Newfoundland was training to be a therapy dog.

“They have a very sweet personality, she’s learned so much,” said Janet Carraway, the school counselor and Heidi’s owner.

“She knows the difference when she’s working versus being at home. Her demeanor changes,” explained Carraway, “She knows that she’s here to work.”

For 13 years she’s had stuffed animals in her office, but wanted to try something new.

“It kind of started me thinking, this is a need here at our school,” said Carraway.

“When Ms. Carraway came to me last year and said I really want to have a therapy dog, I’m like yeah let’s do it,” exclaimed Rose.

Heidi’s more than 100 pounds of comfort, support and most importantly, love.

“They have the weight that they can use pressure therapy and you know they’re kind of like a big pillow,” said Carraway, “If a child wants to lay on the floor and lay on them, they’re not going to hurt the dog. If someone steps on her tail, it’s not going to hurt her too much. So there’s benefits of having the large dog too.”

Heidi spent class time with students and said hi to all her friends in the hallways.

“I’m proud. I think that’s one of the biggest emotions that I feel,” said Carraway.

Heidi turns one year old on November 23. At that point she’s eligible to become a certified therapy dog, but Carraway wanted to wait till January for her to be tested.