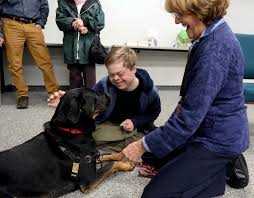 While the topic of Jean Baur’s next book is a sad one — what we can learn from the grief of losing a dog — the mood Saturday afternoon was joyful for her talk at Waterford Public Library, where she came with her newer therapy dog, Rudy.

Or, for at least one person, the mood turned from scary to joyful.

Six-year-old Avery Rothholz appeared nervous as she walked into the downstairs meeting room, saying she feared Rudy’s teeth. Her grandmother, Susan Rothholz, told her that Rudy doesn’t bite children — and later commented that her granddaughter is “invincible.”

But by the end, Avery was excited to be a part of Rudy’s “special trick,” in which the 3-year-old Rottweiler-shepherd mix jumps over a person who is on hands and knees.

It was Baur’s late dog, Bella, who comforted her after Baur lost her job of 16 years as a career counselor. She got Bella certified as a therapy dog and began taking her to schools, hospitals and senior centers. In 2016 she published “Joy Unleashed: The Story of Bella, the Unlikely Therapy Dog.”

In June 2017, she and her husband got Rudy, then 3 months old and one of nine puppies from Tennessee. They were all named after drinks, but Baur couldn’t see herself outside calling, “Whiskey Sour! Whiskey Sour!” and changed the name.

Bella died from a surgery to address a tumor in January 2018. Baur has not yet found a publisher for her new book, “Bella’s Last Gift: Legacy from an Unlikely Therapy Dog.” The Stonington resident also has a new program supporting victims before they testify in the courthouse in New London.

One of the people who bought Baur’s first book on Saturday was Randi Cormier, who lives with her daughter and 6-year-old grandson, Cayden Trivette, in Baltic but makes the trip to Waterford Public Library because she loves its programming.

This program was especially fitting, as she hopes to get both family’s dogs — Maddie and Chowda — certified as therapy dogs.

Cormier has seen what a difference the dogs have made for Cayden, who has autism, and would love to take the dogs into schools to help other kids.

She said when Cayden is having a meltdown, the dogs go right over to him and comfort him. She said the dogs help him have more focus, responsibility and independence.

A bundle of energy, spinning around the room on Saturday, Cayden told the group about how therapy dogs help people with autism, and about how commands to “leave it” are important so dogs don’t get sick from eating banana peels or tacks, and about how his dog had to go to boot camp.

Cormier said it was helpful to see how Rudy can be a therapy dog but a pet as well, saying that “so many that I’ve met, they’re more just therapy. They don’t really get a chance to be a pet.”

Baur noted that Rudy was more nervous than usual on Saturday, because he thought the sound of people moving one floor up was thunder.

Baur told the group of three children and eight adults, “One of the amazing things about therapy dogs is they unlock stories; they unlock people’s memories or stories.” She recalled going with Bella to the cancer ward, and meeting a man who told her all about first seeing the woman who would become his wife, when she was riding on horseback through a field.