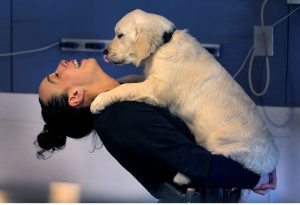 Foxborough’s Igo Elementary School will soon be going to the dogs — or rather to the dog — as the school gets ready to welcome Matty as its official therapy canine.

Matty, a young black Labrador who has completed the training needed to stay calm and cheerful in chaotic settings, will visit classrooms in a pilot program designed to test whether an in-house therapy dog will help students build self-esteem, social skills, and sense of community.

“Studies have show that animal-assisted therapy can be beneficial for individuals with social, emotional, behavioral, and/or learning needs,” Principal Mike Stanton said in a note posted on the school web page. “We are excited to welcome Matty.”

The school has about 370 students in kindergarten through fourth grade, and Superintendent Amy Berdos said Matty will start visiting regularly as soon as the School Committee finishes approving a policy, which she expects to happen by the spring.

Foxborough will be joining a growing number of schools that have brought dogs into their buildings to enhance the sense of community.

Marshfield High School, for example, has had an in-house therapy dog for almost three years. Nala, a German shepherd, has been coming to school since she was a puppy, accompanied by her owner, adjustment counselor Rebecca O’Dowd. The district’s education foundation provided the money to train Nala as a certified therapy dog.

Nala and O’Dowd visit classrooms and attend pep rallies, proms, football games, and many other school activities. Teachers ask for Nala to visit before or after stressful tests. Students also can sign up to meet Nala individually, although O’Dowd said they have to visit with her as well. “I don’t know about the science, but I’ve noticed that [Nala] provides a sense of community for kids,” O’Dowd said. “We have a huge building — about 1,300 kids — and they all have her in common. She provides a sense of calm, and she brings a smile to people’s faces. The kids absolutely love her.”

O’Dowd said she finds out whether any staff members or students are allergic to or afraid of dogs, and accommodates those needs by rerouting her walks around the school or meeting students in a separate room without Nala.

Center Elementary School in Hanover also has an in-house dog, a yellow Labrador named Gianna who is trained as a service dog. She has been coming to school since December of 2018 with adjustment counselor Amy Madden.

“It’s been nothing but a positive experience for students and staff,” said Principal Jane DeGrenier.

Larry the Poodle has been working in Randolph since 2016. Walpole has Rebel; Brookline has Bear; and Sharon and Franklin have had community resource dogs on staff for a while, according to David Traub of the Norfolk district attorney’s office.

The English Cream Golden retrievers were bred and trained as therapy dogs by Walpole-based Golden Opportunities for Independence. The training is far from the training given to traditional police dogs.

“These are very mellow dogs,” Traub said. “These are teddy bears.”

District Attorney Michael Morrissey said he expects the use of support dogs to become more common. “Good ideas spread. And this is a very good idea,” he said.