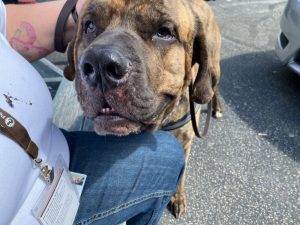 Residents at Harbor Village Health and Rehabilitation Center in New London waited eagerly at their windows, some with their cameras at the ready. One resident held a hand-written note that read, “Duke: Harbor Village Rockstar”.

Duke, the center of the fanfare, is a 120 pound English Mastiff, but the residents at Harbor Village know him to be a gentle giant. Duke is a therapy dog and has visited the nursing home more than 250 times in the last two years alone.

“Duke is everything to them,” said Jill Jeznach, the facility’s recreation director. “He has a little cheering squad in the lobby that waits for him on days they know he is coming.”

The wait is now indefinite. COVID-19 restrictions on Connecticut nursing homes have kept Duke away for several weeks, leaving both Duke and the residents longing for each other.

Maynard-White also knew how difficult it was for the residents right now, who are not allowed any in-person visits.

“When they have already lost so much and to take away one more thing that is special to them, you don’t know what it can do to a person,” said Maynard-White.

That is when she had the idea of doing window visits. Now, Duke will walk around the building three days a week and visit windows. Maynard-White made signs that read, “Duke, come to my window,” so the pair knows which windows to visit.

The residents have been loving the visits so far. They even decorated their windows with paint for Duke.

“It is very depressing and very scary at this point in time, but we are good here. Duke is always a bright spot and helps take those thoughts away and makes you concentrate on something else,” said Michele Doran, a resident at the facility.

Thurston Delaney agrees. Delaney is the resident who made the sign about Duke being a rockstar.

“We are going through a really hard time right now and it is just something to look forward to, seeing him,” said Delaney. “Like I said, he is a true rockstar.”

Maynard-White said that Duke feels what people are feeling and can take the burden off others. She stressed that seeing Duke through a window is not the same as seeing him in person, but, right now, even a slice of normal is enough.

“Even if you can just touch a hand to a window, you are telling them you love them,” said Maynard-White.