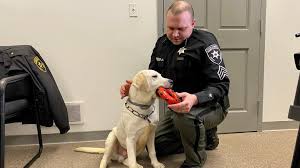 “Buddy’s been awesome,” said Sheriff Brian Weigle. “He really helps us all out.”

Buddy is a 6-month-old English Lab. He’s the newest member of the Tyler County Sheriff’s Office and he has a very special role.

“Mainly he’s going to be there for the children,” said Buddy’s handler Sergeant Mitch Corley. “I’m the school resource officer in Tyler County, I’m one of three.”

Buddy will be roaming the halls of the county’s schools to help bring the officers closer to the community.

“We’ve seen a rise in substance abuse, domestic abuse and other issues in the home,” said Sergeant Corley. “It’s a good break in the barrier.”

“Kids are our future and whatever we can do to help them, that’s what we’re wanting to do,” said Sheriff Weigle.

The coronavirus pandemic has all of the schools empty, but this is giving Buddy’s handler time to get to know his partner that he’s only had for three weeks.

“It’s gave me some time to train more one on one with him and him to get used to me,” said Sergeant Corley. “I think it’s helped but I’m sure he can’t wait to get into the school.”

Buddy will be joining fellow Tyler County K9 Queso, but his work is not about finding criminals and will extend much farther than the classroom.

“We can go to the senior centers, we can go elsewhere,” said Sheriff Weigle.

The sheriff saying that Buddy is there for the entire county, whenever they need him.

While Sergeant Corley says having Buddy around the office has been fun so far, he said he can’t wait to get his new partner into the schools.