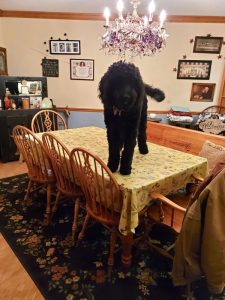 SMASD Superintendent Brian Toth, also Brooklyn’s owner, said she is 10 months old and the second youngest in her class.

“Each dog progresses at different rates, but I’d say her progress is about half complete,” he said.

Earlier this year, Toth said he decided their next family dog would be a therapy dog, who could help reduce stress and anxiety for students.

Brooklyn’s last training was at Lowe’s in Warren, Toth noted. “This is to promote socialization and exposing her to different settings, situations and people,” he said.

Brooklyn can now “sit” and “stay” at one end of an aisle at Lowe’s, Toth said.

“I walk to the other end, call her and she comes running to me,” he said.

She has learned to “stop” on command while on stairs, Toth added, and how to get on and off an elevator, as well as how to be around other animals, crawl through spaces on command and others.

Brooklyn has visited schools already within SMASD, Toth said at a recent board meeting, getting acquainted with students and staff, who have quickly fallen for her.

“Students love how soft she is and love to scratch her belly and pet her,” he said. “Brooklyn loves the attention and is very calm with the students. There are a few adults who want and receive a big ‘Brookie hug,’ and they let her jump up on them.”

When she’s not being a professional, Toth says Brooklyn loves to chase her laser light and catch bouncing balls.