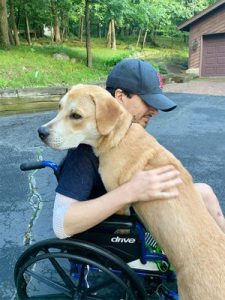 A borough couple and their new best friend, Otter, are sharing their story of resurgence following a near-fatal skydiving accident to help a North Jersey animal shelter potentially win $25,000 from the Petco Foundation.

Ian Azeredo, 34, and his wife Linda Farkas, 30, adopted Otter, a young Labrador retriever and hound mix, from St. Hubert’s Animal Welfare Center in Madison this spring. While there are plenty of shelters closer to home, they chose St. Hubert’s for one key reason.

“He spent two mon ths in the ICU in Morristown,” Farkas said. “And they wouldn’t let you eat in the ICU. So I went one day to shovel lunch in my face real quick and saw this couple putting up therapy dog posters. They were local to Morristown, and they actually recommended St. Hubert’s.” An avid skydiver with more than 600 jumps on his record, Azeredo nearly died in July 2019 after he hit the ground at nearly 60 miles per hour in an accident he barely recalls. The impact broke dozens of bones, severely damaged organs, put him in a coma and left a dent in the earth. Azeredo spent nearly nine months in recovery down the road from the shelter at Morristown Memorial Hospital before he was released in March.

“I was a broken toy there, just kind of hanging on,” he said. “The one good thing was they had these therapy dogs that would come in and just kind of say hi to people. A lot of them were from St. Hubert’s.”

Azeredo and Farkas said they always wanted a dog but felt too busy to be proper caretakers considering their adventurous hobbies and demanding jobs – Azeredo is an aerospace engineer; Farkas a chemist who develops flavors. However, with the pandemic and the accident forcing them to be home more often, the time was right, Farkas said. So, they drove 45 minutes to St. Hubert’s.

A volunteer directed them to Otter, who baited them in with a wagging tail. Then, he jumped on Azeredo’s wheelchair and licked his face. “Immediately, I said, ‘This is the boy, right here,'” Azeredo said.

They named him Otter, after the Twin Otter plane the couple jumped out of on their first date in 2013.

To give back to the shelter that gave them Otter, Azeredo and Farkas submitted their adoption story to the Petco Foundation Holiday Wishes grant campaign. Since selected as one of 50 winning entries, their story is up for the People’s Choice Prize that could net St. Hubert’s a $25,000 grant. Voting runs through Dec. 16. Foundation members will also be selecting prize winners for organization awards of up to $100,000.

Tiffany Barrow, the shelter’s vice president of operations, said more than 100 shelter supporters submitted their stories to help St. Hubert’s try to win money from the Petco Foundation campaign. Shelter members broached the idea to adopters, after hearing so many heartwarming stories from those who email or post about their adopted pets on social media, she said.

“While each adoption and each family is unique, the common thread is that welcoming a pet into your home changes your life for the better,” Barrow said. Otter isn’t faultless – he barks at the delivery man and can be obstinate – Farkas said, but he has quickly become the couple’s best friend. When Azeredo is in pain, Otter joins him on the couch. When Farkas wants someone to adventure with, Otter will enthusiastically hike and go paddleboarding.

“Otter is perfect for us,” she said. “He is always ecstatic to see us, no matter how rough our days are.”

To continue to give back, Azeredo plans to have Otter certified as a therapy dog, so he too can roam the halls of Morristown Memorial Hospital.

“I remember being in that bed,” he said. “It’s hard to explain the frustration and shock that comes with being there and having so much uncertainty. Hopefully, I can help some people out by just relating, talking when they are going through a similar nightmare.”