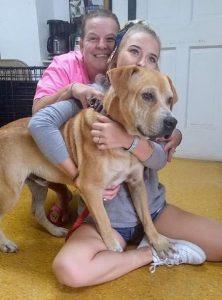 After being left tied to a post in the Hawkins County Humane Society parking lot overnight last week through a torrential downpour, a Labrador mix that was later named Oakley should be the one in need of emotional support.

Oakley literally ran his paws bloody during the 12-hour ordeal.

Instead, it’s Oakley who will be providing comfort for his new owner as a newly registered emotional support animal.

HCHS video surveillance shows a man stopping at the Rogersville shelter on July 28 at 9:22 p.m. and tying Oakley to a clothesline post next to the parking lot.

Oakley had no shelter when a thunderstorm hit later that night, and he wasn’t discovered until staff arrived at the shelter the next morning.

HCHS Manager Sandy Behnke is hoping someone will recognize the person who abandoned Oakley from a still photo captured from the video. She hopes to identify the person and prosecute him for animal neglect.

“When we came into work on July 29, (Oakley) was wet and his paws were bloody from trying to get out of the rain all night and possibly to go find his owners who dropped him off,” Behnke said. “After viewing the video, we noticed the man took (Oakley) out of the car and tied him to a pole and drove off. You can see the dog try to chase him, only to be yanked back from the rope.”

Behnke added, “Also in viewing the video, we noticed the hard rain that fell that night. It would not have bothered us if he would have tied him where there was shelter, like by the back or front door, but there was nowhere for this baby to get out of the weather.”

Vickie Kiker read about Oakley on the HCHS Facebook page and contacted the HCHS about her daughter, Chloe Quann, who needed an emotional support animal (ESA). Vickie and Chloe then went to the shelter to meet Oakley, and it was love at first sight.

Chloe told the Times News on Tuesday she suffers from anxiety and depression and because she is pregnant she had to stop taking her medication.

She also wanted a large dog that would not only be there for her, but to grow up with her child as well.

Since being adopted last week, Oakley has already become a registered ESA.

When she saw Oakley’s photo on Facebook, the first thing she noticed was he looked exactly like her dog that passed away two years ago.

“After I seen him, my mom’s like, ‘I’m not trying to push a dog on you, but I think you need to go look at this dog,’ ” Chloe said. “I went and looked at him that day, and then I fell in love with him. He was extremely friendly. Where I’m pregnant, I need a dog that’s good with kids. I need one that’s extremely friendly.”

Shelter staff believe Oakley is between 1-3 years of age, and undoubtedly the experience of being left at the shelter overnight was traumatic. Chloe said he’s doing very well and adapting to his new home.

His paws are healing with the help of Chloe, who bought ointment and some little paw booties to keep him from rubbing off the medicine

“He was timid at first until he realized I wasn’t going to take him somewhere and leave him again,” Chloe said. “I took him for a ride to get a pup cup (dog ice cream), and he was terrified to get into the car. Now he realizes he’s coming back home with me again, and he’s fine.”

Chloe added, “I can’t see why anyone would leave something this precious out in the open like that. He’s good with other dogs. He’s good with kids. He played with my nephew the other day. He doesn’t bark. He eats a lot, and he’s spoiled. He’s precious. I love him.”