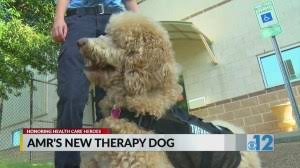 Animals have a profound effect on people. A friendly face and a wagging tail can brighten up even the worst day. EMT’s and Paramedics routinely respond to life and death situations. Dealing with all that stress can be a challenge.

Diane Sampson is the Operations Supervisor for AMR in Jackson.

She says, “We work 12 hour shifts, and so sometimes the days are pretty long, and a lot of our crews, if they’ve had a really rough day, they come in and look for Shelby, and they just play and love on Shelby, and she loves them back.”

Shelby is a 15 month old Golden Doodle, and as of last month, she’s a certified therapy dog. Of course she can sit, stay and lie down, but her training went much deeper than that.

Diane, who is also Shelby’s primary handler explains, “You have to be able to give her something to eat, reach down and take the food from her, and she shows no aggression that you took the food.”

Let’s face it, most people couldn’t do that.

Alex, who is Shelby’s secondary handler adds, “No, there is not a mean bone at all, not at all.”

Diane explains, “It can lower heart rate, lower the blood pressure, increase endorphin production. It just has a real benefit.”

We asked, “Shelby is kind of magic, isn’t she?”

Diane answered, “She really is, and she knows it, and she’s spoiled.”

But she’s also totally worth it. To pet her, is to be at peace.

Shelby picked up some of her skills at 3 D Dog Training, here in Jackson. Golden doodles can make good therapy dogs. Shelby’s brother is also a therapy dog in South Mississippi.