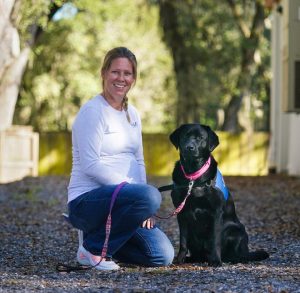 Carol Lansford was in her final semester at Valdosta State University in 2012, “pretending to pay attention in class,” when a Facebook post jumped out at her. Her high school buddy Justin had been wounded in Afghanistan. The details would dribble out in excruciating increments.

She was a psychology major, with designs on exploring animal behavior. Her internships put her in close contact with rehabbing dolphins at Dolphin Encounters in The Bahamas, and at Zoo Atlanta. But what happened after that jarring news eight Aprils ago put her on a path she could never have planned.

Today, Lansford is the executive director of a small nonprofit called Valor Service Dogs. Located in an 1800-foot facility in Tampa, VSD embodies the surge of interest in the utility of canine behavioral science, in which dogs can be trained for missions as diverse as mobility assistance, seizure response, autism mitigation, and emotional support.

She and Justin grew up outside Atlanta and had known each other since their teens. They drifted apart after school – she went to college, he joined the Army – but they reconnected after Justin returned home following his tour of Iraq in 2011. The relationship had growth potential, but he would once again deploy overseas with the 82nd Airborne Division.

The Facebook news was a bolt from the blue. It was an announcement from Justin’s father. There was a game-changer in Gazni Province on April 21, 2012.

Responding to an ambush by Taliban insurgents, Justin’s armored vehicle – he was a gunner – struck a 120-pound roadside bomb that tossed him from his mount. When he came to, Justin was lying beneath the burning remains of the truck, the boot that contained his left foot lying next to his head.

Upon returning to Walter Reed National Military Medical Center, young Staff Sergeant Lansford and Carol stayed in touch. But it wasn’t until October 2012, in a top-secret plot hatched by Justin and one of Carol’s best friends, that they saw each other again. Expected to be greeted at the airport by an old college roommate, Carol found Justin waiting for her outside security.

“Oh, I’m pretty sure I cried, I don’t even remember,” Carol recalls. “Justin had so many injuries, but he was so positive, it was easy for me to be positive.”

Those wounds would include a broken back and a ruptured spleen. Justin would require multiple surgeries and three years of physical therapy at Walter Reed. Carol would move to the Washington, D.C., area. With a dog named Gabe serving as Best Man, they married in 2015 in a ceremony that rated coverage on “Good Morning America.”

Justin met Gabe, a golden retriever, during his long recovery, in 2013. And it became obvious pretty quickly why Justin needed a service dog.

“Washington is an old city,” he says, “with a lot of staircases without handrails and old buildings that aren’t up to speed, ADA-wise. Some haven’t been retrofitted, some are historical buildings and are exempt. So the ability to walk through a door and get through an entire day without Gabe is very difficult.”

Carol noticed Walter Reed was full of veterans and service dogs. She made a few inquiries and learned most of the animals were trained by a government partner affiliated with Assistance Dogs International (ADI), which sets rigorous gold standard goals for certified trainers and dogs. Carol completed the program and went on to become an instructor herself.

The Lansfords moved to Florida five years ago. Justin graduated from the University of South Florida with a degree in International Studies. Lately, he’s studying medicine with designs on emergency medicine.

“I guess you could say I just had a change of heart,” he says. “I just like helping folks, that’s always been my M.O. Hopefully, I’ll get to  work in an emergency room. Maybe someday I’ll even be working on helicopters.”

Carol, meanwhile, decided to start her own service-dog training facility catering to Americans on the front lines of conflict, abroad and at home.

“I looked at a lot of service dog organizations but I didn’t feel like they were a good fit for me. They weren’t using the ADI standards I was used to,” she says. “I mean, some of them were graduating dogs that shouldn’t have graduated, and I think, as a nonprofit, it’s important how you spend your donor money.”

Founded in 1986, ADI is an international network of trainers and providers with standardized rules for developing a range of canine skill sets. It counts hundreds of members representing 23 countries in North America and Europe, including Australia and New Zealand.

Carol’s Valor Service Dogs is nine months away from applying for ADI certification. With up to two years invested in raising and training specialized dogs, her program didn’t start producing results until 2017. Since then, she says 21 dogs have been matched with qualified owners, with only two mismatches.

“Those are dogs that didn’t quite make the cut for service dogs, meaning they can’t have public access for behavioral reasons,” she says. “For example, one dog was so afraid of elevators and escalators we couldn’t get her approved for public access because those are things you run into every day. But she was fully trained in commands and behaviors, so we put her with a retired service member who needed the companionship but not necessarily a full service dog.”

To become ADI approved, service dog groups are required to have placed at least five dogs with recipients, each with a year’s worth of successful working relationships. VSD became eligible to apply for membership a little more than a year ago and is now in its “candidacy” phase.

Producing successful dogs – in this case, golden retrievers and labs – requires a deep bank account. Each one represents a time investment of 18 months to two years, plus an average of $15,000 to $18,000 in maintenance and training. How long each dog can work varies with their assignment.

“Service dogs are expensive, so you want to maximize the work you get out of them by checking their lineage for things like joint problems or cancer,” says Justin, whose prosthetic leg sometimes requires a steadying assist from Gabe. “If you’re using them as a handrail or you’re putting a lot of weight on them, if they’re pulling a wheelchair, obviously they’re not gonna last that long. And you’re going to need a bigger dog for that.

“Gabe will be 10 years old on April 28. But what he’s meant to me is not just the freedom to get around, but I’ve got a friend with me all day, morning and night. Having somebody without you throughout the day is about emotional independence, too.”

Justin estimates Gabe will provide another two years of service before retirement into house-dog status.

In the meantime, Carol keeps VSD afloat with the help of mostly donors, plus a handful of grants and a board of directors that resembles an all-star cast. It includes clinical social worker Debra Isenstein, who worked with transitioning veterans at Walter Reed, entrepreneur Philip Tulkoff, and Pennsylvania State Trooper Alex Douglass.

Tulkoff, President of Tulkoff Food Products, lost a cousin to a roadside bomb in Afghanistan in 2012. Douglass was critically injured in 2014 when a sniper attacked the station and killed a fellow officer. Douglass lost his right leg below the knee as a result of his bullet wound, and was the first to receive a service dog from VSD.

Carol’s long-term goal is to move out of the current facility’s rental space and purchase a more expansive locale with the ability to train more dogs. VSD has a “satellite” operation in Georgia. But finding the right mix of resources will require finesse to obtain and maintain that crucial ADI rating.

“Yes, it costs a little money to be a member, but honestly, it’s just a huge undertaking to get there, with all the records you have to supply, and the visits they make to your facility to meet the dogs,” she says. “Right now, we have a high success rate with a low fail-out rate. We want to help more people than we are now, but we also want to stay small enough to where our success ratio stays high and the recipients know they’re getting great dogs.”

The Lansfords have high hopes for 2021. They’re expecting their first child in March.