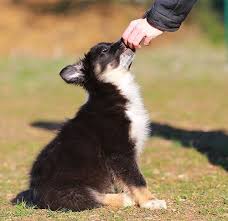 A copy of the Otago Daily Times lands on the driveway of a home in Queenstown’s Lake Hayes Estate.

Moments later, a bark is heard, the front door is opened and out bounds Baxter, a 5-year-old poodle.

Baxter is in work mode and quickly scoops up the newspaper and heads back inside to pass it to his mistress, Judy Reid.

Mrs Reid has issues with her balance and mobility assistance dog Baxter helps anchor her when she walks, in lieu of using a walker or cane.

He also helps her around the house and when he is not in work mode, he is like every other dog — snoozing on the couch, looking to be fussed over or ready to bound after a tennis ball.

Puppy raisers play a vital role in the early stages of a young Labrador or golden retriever’s life (Baxter is an exception as a poodle), socialising them and getting them used to going to a cinema or cafe or even simply walking calmly alongside a busy road.

Raiser Andrea Vernall is a senior lecturer at the University of Otago and she brings her trainee assistance dog Dalton to work.

For Dalton it is still about new smells and sights, but her previous pup, London, learned to sit or lie quietly during her chemistry lectures.

Assistance dogs are not like pets. There are very few boundaries for them, because the people they help need them to go wherever they go.

It is the job of a raiser to familiarise a dog with these duties and the dog needs to be supervised and taken here, there and everywhere.

Dr Vernall said part of job was instilling good habits from the start. “They have to sit on the floor of a restaurant nicely and not beg or scavenge off the floor, but if you are consistent from a young age they don’t know anything different.”

To get to that point is a bit of a learning process for an inquisitive and excitable puppy.

“When they are puppies you visit lots of places briefly … We pop in for a takeaway coffee and sit for two minutes — that’s good exposure for a young dog.”

The dogs must wear a distinctive green mobility assistance jacket and golden tags when working or training — and that is when members of the public need to play their role, too.

“Most people say ‘can I pat your dog?’ and I have say ‘no thank you’,” because the dogs needed to know going out wasn’t about getting lots of attention, she said.

“You have to be strict on that so they don’t pull someone in a wheelchair away when they are older.

“If somebody runs over in a supermarket, I block them and explain.”

Just like Baxter, London and Dalton are free to be happy-go-lucky dogs when their jackets are off, but the important part of training is teaching them to switch on and behave when wearing the jacket.

“You would take London’s jacket off and give the release command and his bum would waggle and he would know he could approach someone. Same with toileting — they know they can’t go with a jacket on.”

Dr Vernall stressed how much support there was from the trust, with co-ordinators and other raisers at the other end of the phone.

The trust can organise for a pup to be taken care of for short periods if its raiser has to go away, but largely it is a full-time commitment over the course of a year.

The raiser also has to attend two training sessions a month and aim to have the dog learn 40 commands.

In return, all food, some toys, a harness, leads and vet bills are taken care of and somebody who cannot commit to a dog for 15 years gets the company of a pup for a year that will go on to improve a disabled person’s life.

“It’s a great opportunity for the right kind of people,” Mr Reid said.

“After a year the dogs go on to advanced training in one of the Auckland correction facilities.”

Selected inmates at Wiri and Spring Hill Prisons receive a dog to train, which in turn helps improve their own discipline, sense of empathy, teamwork, leadership skills and social behaviour.

This eight to 10-month training programme is important for the dogs and helps the trust identify those dogs unable to work, be it due to anxiety, poor response to commands or their own disability issue.

After advanced training some of the dogs return to the South Island to be paired with a person living with a disability.

Both dog and potential owner go on a two-week camp to become familiar with each other and comfortable with fulfilling each other’s needs.

It was also a chance to ensure the right dog was with the right person, both in terms of skills and personality, Mr Reid said.

“At the end they are then able to work as a team, inside and outside the home.”

Most dogs go on to help people with mobility issues, but some are matched with dentists or courthouses.

“These are for therapy-related tasks — they help children, especially child witnesses in the court system and anxious kids in the dentist’s chair.”

For those with mobility issues, a dog can help well beyond just fetching items from a shop counter or retrieving a hat blown off in the wind.

“One of the big benefits, other just doing things for them, is the social side.

“If you picture somebody in a wheelchair, most Kiwis can be reluctant to chat with them, but if they have a dog it is an icebreaker.”

Anyone who took a dog on needed to remember they belonged to the trust and had to be given back, Mr Reid said.

That could be hard, but the dogs would go on to significantly improve somebody’s life.

Covid-19 had meant all training had stopped across New Zealand and he was looking for raisers to help restart the process, Mr Reid said.

Ideally, they would be living in the Queenstown-Lakes district, near him, so he could easily provide training and support.