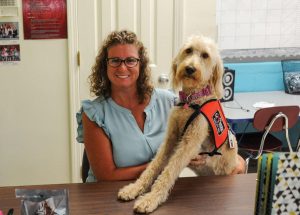 A fresh and fluffy face will greet students at Stephens Elementary School this year and provide an added layer of comfort to improve the children’s daily lives.

LeeLee the facility service dog is trained to sense anxiety, concern and behavior changes to ease the minds of students and teachers.

“She can help with social and emotional issues or just bring good vibes,” director of elementary schools Ellen Martin said. “She is precious and we’ve been wanting a service dog in the school system for several years.”

Teachers submitted applications to be the chosen handler and Stephens science, technology, engineering and math teacher Leanne Waldrop qualified to train with LeeLee the labradoodle for a week in Hope Hull. Waldrop and LeeLee stayed in a hotel for a week to practice basic commands and spent time training with Service Dog of Alabama in a school to get familiar with hallways and classrooms.

LeeLee has been training for this work since she was born so the week in Hope Hull was mainly for Waldrop and to establish that bond between her and the dog.

“The week of training was the week before spring break,” Martin said. “So on our way down on Friday for (training) graduation is when we got the announcement that the governor shut down schools.”

Therefore, LeeLee has not actually met any students yet, except for Waldrop’s three children, ages 4 and 6. LeeLee will live with Waldrop and get to be a family dog while at home. Waldrop will be her guardian until the current 3-year-old pup retires. Most service dogs retire after six to eight years.

“It’s going to be really interesting when school starts back to see what the kids have to say and how they react,” Martin said.

Martin submitted a request letter in the fall and sent in the application to Service Dogs of Alabama shortly after.

“The application was detailed and we had to describe the people we serve and how the service dog will improve their outcome,” Martin said. “One of the main reasons I think we were selected was based on our need for a service dog.”

The service dogs are trained to keep students calm, serve as a deterrent for bad behavior, act as a therapist for children not comfortable talking directly to an adult and many other situational responses.

“I’m excited for all the positive benefits our students will have with her,” Waldrop said. “She will be shared with the counselors and is trained to sense stress issues and go to children who need it.”

Alex City Schools paid $6,000 for LeeLee and is responsible for all vet costs, regular medication and crates for both Waldrop’s classroom and at her home. LeeLee wears a service dog vest and an Alexander City Schools employee tag as she is considered part of the staff.

“I am excited for the opportunity to provide the students a service dog,” Stephens principal Ivy Pike said. “We don’t know what they’ve experienced for the five months they’ve been out of school so this will add another emotional layer of support.”

Waldrop will be transitioning to all classrooms at Stephens throughout the day, so all the children will be introduced to LeeLee.

“It also teaches children responsibility,” Waldrop said. “They can walk LeeLee, with supervision, and there will be rules and guidelines for students to follow during the school day when it comes to her.”

Students will get to greet LeeLee each morning as they enter school to start everyone off on an enthusiastic note. A letter will be sent home to parents of Stephens’ students before school starts to let them know LeeLee will be a part of their daily routines.

During the first three years, Waldrop and LeeLee have to attend Service Dogs of Alabama trainings twice a year and once a year after that.

“It’s a big deal and a very great responsibility to be a handler,” Martin said.

Alex City natives Ann Goree and Carol Lee were two driving forces behind Alex City receiving a service dog. Lee is on the Service Dogs of Alabama board and the two made it their mission to make this dream become a reality. They also hosted a fundraiser last fall that helped with the funding.

Martin hopes to get service dogs for Jim Pearson and Radney elementary schools in the near future as well.

“Anyone wanting to donate to that cause can do so with the Alexander City Schools Education Foundation,” Martin said.