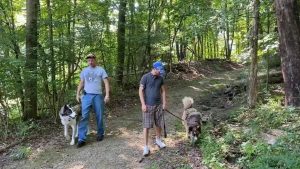 For three local veterans, service didn’t stop after life in the military.

“We train service dogs for people that have disabilities, whether that be medical, like physical, or it be mental,” said Taylor Carnell, an owner and co-founder of King and Queen Diamond K9, “Our main focus is on mental health.”

Taylor, along with his wife Sarah and their Kennel Master James Grissom, works with dogs of all breeds and train them to serve.

They’ve learned the benefits of a service dog and have experienced the difficulty of trying to get one.

While they want to help veterans, they will help anyone that needs a service animal.

“We’ll help any veteran. You don’t have to go through a process with us. There’s no criteria you have to meet other than service – that’s it,” Taylor said.

Taylor and James agree that service dogs can help veterans and even help bring down the number of veterans that commit suicide every day.

“I’ve been through it and it is a struggle. It’s very hard,” James said, “and with him, I mean, it’s life-changing for me. My life has completely turned around.”

Taylor and Sarah have been working with dogs for years.

They also learned from a veteran friend of Taylor’s who trains dogs. This past March, they went public with their company King and Queen Diamond K9 and currently have eight dogs.

“We don’t want people to have to wait or get put on a list because sometimes that stuff can take months,” Taylor said. “The waiting game is what sucks for a lot of veterans.”

Right now they work with dogs, but are willing to train any animal that will help make someone more comfortable in their day-to-day life.

“For the most part, though, everything’s trainable,” James said.

“If having a cat, a bird, a lizard or something in your pocket is going to make you feel better, bring it to me and we can make it work somehow,” Taylor said.

Recently, they agreed on a partnership with Valor Recovery Centers in Austintown to bring service dogs to group sessions.

James added that the dogs might make people feel more secure, and help people open up and talk about something that they wouldn’t otherwise.

“They might be like, ‘OK I feel safer now… I’ll actually open up and talk about this stuff that’s been bothering me that hasn’t been talked about,’” he said.

Taylor, Sarah and James shared their struggles after life in the military and found a remedy and companionship in dogs that helped them tremendously, and they want to make that available to others.

“It was like a fresh start,” Taylor said. “He opened up a certain part of me that I’ve never seen before. I can approach people. I can go in the store and be in there for three or four hours and it doesn’t bother me.”

James said after the military, it was hard for him to adjust and he was trying to get a service dog to help.

“I seen a post about this dog being up and wanting to be with a veteran so I reached out to Taylor and that’s how I wound up with him,” he said. “From the time that we met, I was pulled away from everybody and ever since I got him, I’m more open.”

“It was super exciting to see, not just like the progression in the dog from when we got him, but James as a person completely changed,” Taylor said.