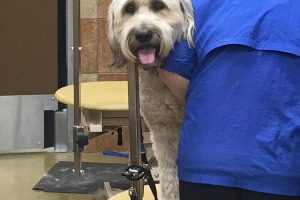 PetSmart has reopened hundreds of its grooming shops across the country, claiming they provide an essential service that should be available to the public during the coronavirus lockdown.

The huge pet supply chain initially closed its grooming operations as governors imposed lockdown orders in all but a handful of states, but last week — placing profits above public health — it reversed that decision and reopened hundreds of the grooming shops in its 1,650 U.S. stores.

The move has drawn the ire of those who say PetSmart is exposing people to a deadly virus to perform what most would agree is a non-essential task.

The most outspoken of those may be the groomers and other employees — some of whom say the chain’s officials are telling them to tell any members of the public who question the policy that grooming helps reduce the spread of the virus, and that the public should not attempt to do it themselves at home.

During the lockdowns, PetSmart stores have remained opened, exempted as essential since they sell dog food and cat litter.

Salons had, rightly, closed — what with nail trims, shampoos, comb-outs and cute pink ribbons on dog ears not exactly being matters of life and death.

As one groomer noted, all of those can easily be accomplished by an owner at home

“There is nothing that we do that a dog owner cannot do at home.”

PetSmart groomers, whom have a base pay of less than $10 an hour, say it is difficult to groom a dog without having physical contact with pet owners and other workers, both of which risk spreading the virus.

By reopening its salons, PetSmart may be violating state orders. Governors in 45 states have told residents to stay at home and have ordered total or partial shutdowns of nonessential businesses to stop the spread of COVID-19, the illness caused by the coronavirus.

In Michigan, where the governor suspended all in-person nonessential businesses on March 23, 22 of 40 grooming locations have reopened.

“Everyone in our store is pretty angry,” said one groomer. “It’s ushering people out of their houses. It’s giving them a reason to be out and about and moving the virus around.”

PetSmart initially closed most of its grooming salons on March 21 “out of concern for the safety and well-being of both our associates and customers,” the company said in a public statement. But it reopened many of those locations on Monday, April 6.

The company says its grooming salons underwent a “redesign” during their closure, making them safer. PetSmart workers are not being asked to perform services that require more than one person to be in the salon and are being told not to accept leashes and collars, a company spokesperson told the Huffington Post.

Groomers who are refusing to work are taking unpaid leave, and PetSmart is not guaranteeing their jobs back when the crisis ends.

Those who are working are receiving no bonuses.

PetSmart says it is working to ensure that workers who choose to stay home can return to the business when they feel the time is right.

PetSmart sent employees a set of talking points to repeat if they are questioned as to why the pet salons are open.

“Hygiene such as teeth brushing, ear cleaning, nail trimming and brushing are essential aspects of regular dog care and cannot be performed by the dog themselves,” the talking points further state. “Pet Parents typically cannot perform these functions themselves without risk of injury to themselves or the pet.”