Catching up with Sara & her dog Hero 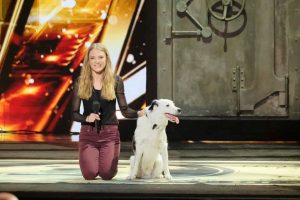 Former North Bayite Sara Carson has had a lot of success since appearing on America’s Got Talent, but the COVID-19 crisis has affected her work doing high-profile personal appearances.

Carson actually appeared on AGT twice, the second time in a competition of former finalists. She says while live shows and appearances were keeping her busy, there have been other television appearances. One was called “The Big Stage” on the CW Network, and another show hasn’t come out yet. She and Hero also were part of a movie that is still being edited, which she hopes comes out soon.

The 25-year-old now resides in Los Angeles with her husband and fellow dog-trainer John Devine. In fact, the name on her personal Facebook page is now listed as Sara Carson Devine, but most of the public still knows her as Sara Carson. The couple now has five dogs of their own, including Hero.

She says their lives changed tremendously when the COVID situation hit.

“We had a seven-week tour ready to go in 23 states, with 11 sold-out workshops. Now that’s all cancelled and so that was a big loss, it took a big impact on us,” she says.

Still, she has optimism in her voice and is still keeping busy.

Training is still something they are doing, and even have some dogs at their L.A. home being trained right now.

“We currently have six boarded dogs that we’re still working with. Training for a typical dog is usually a minimum of two weeks with us, possibly up to a month. We also do service dog training, mostly for medic alert type situations. My husband also does personal protection training of dogs. The service and protection training takes several months.”

Being a transplanted Canadian, Sarah is watching how the COVID crisis unfolds in our country and the U.S.

“I feel like Canada is in the same boat as the U.S, but I think Canada’s Prime Minister is handling things much better than the president. It’s probably a good time to be Canadian and have Canadian health care,” she explains.

And if you’re wondering about the dog most people in North Bay will remember? Hero, she says he is doing well.