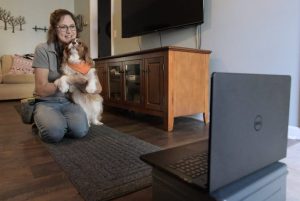 From a home in Hilliard, a Cavalier King Charles Spaniel named Peachez and a Ragdoll cat named Moose have been dispensing cross-country joy via live video-conferencing.

Guided by owner Jennifer Kirkland, they lift the spirits of people who are in hospitals and nursing homes and feel socially isolated because of the COVID-19 pandemic.

Kirkland is a volunteer for the New York-based Animal Farm Foundation’s new Pet Together program, which schedules real-time visits for people needing a boost to interact with the animals and have conversations with their owners.

“I was newly empty-nested and wanted to give back to the community,” Kirkland said.

The 30-minute sessions start as group chats with volunteers and patients. Each volunteer has five minutes to tell the group about them and their pets and then spend time with individuals.

Those one-on-one interactions, Kirkland said, usually begin with questions about her animals and the weather in Florida but can evolve to all sorts of topics. Sometimes she shares unusual stories about all her pets — she has five — such as the kitten that tried to nurse on the dog.

“You’re talking to people all across the nation, all walks of life,” she said. “I want to make them happy.”

On a recent Tuesday, Kirkland was on a call to an Arizona memory care facility with four or five residents and a caregiver. They asked questions about the animals, which they called “adorable,” and enjoyed a few tricks from dogs that were on the call.

“Another Pets Together volunteer had a chubby English Bulldog who did his ‘Army crawl’ for a treat that everyone loved. There were some large Poodles that did some tricks and a few small dogs that tried to do tricks but mainly looked cute and sweet,” she said. “The residents loved talking with the volunteers and seeing all the animals. Lots of smiles.”

The sessions not only benefit the patients, but help keep animal-therapy teams at the top of their game after months away from in-person hospital or nursing home visits. If Kirkland’s Peachez and Moose lose focus during the calls or wander away from the screen, she has treats on hand to redirect them.

Occasionally she needs more than treats.

“They may fall asleep. I have to wake them up,” she said.

As with any video-conferencing call, the sessions are occasionally interrupted by people walking through the setup on the other end. Volunteers also sometimes liven things up by wearing costumes, as was the case for Halloween.

“I like learning their stories,” she said, and letting them “know someone cares.”

The Pet Together program began at a nursing home in Towson, Md., and was so well-received that the Animal Farm Foundation took it national. It is also available for doctors, nurses and other health professionals fighting the coronavirus crisis.

“One of the many effects of the COVID-19 pandemic is social isolation and loneliness, which were already highly prevalent before the crisis,” said Stacey Coleman, executive director of the foundation. “We designed Pets Together to adapt to these unprecedented circumstances by tapping into the power of pets to spread joy and bring people together.”

The mission of the foundation is “to bring dogs and people together to end discrimination,” according to its website. The nonprofit also has a service-dog program, enlists correctional facility inmates to train dogs, funds the training of K-9 detection dogs, advocates for non-discriminatory laws and policies and the end of breed-specific legislation and offers free resources to animal welfare workers and community advocates.