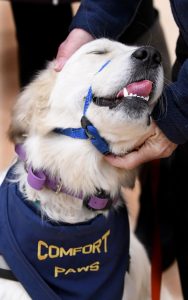 The Southeastern Massachusetts Paws of Comfort Lions Club, officially chartered on Oct. 25, is “ready, able and willing” to go out and serve its community and district with their therapy dogs, according to co-founder Monique Tedino.

The new group of the South Attleboro Village Lions, which has 23 members and 13 dogs, three of which are still in training, met at LaSalette Shrine on Saturday morning to announce their readiness to get to work and their mission plan — “To bring comfort and joy, four paws at a time.”

There are also seven associates with the Paws of Comfort, including members of its parent club, the Village Club.

The Paws of Comfort are part of District 33S of Massachusetts.

Sandy Fife, the district governor for the Lions Club, said she was excited to have the first-of-its-kind club chartered.

“It’s so exciting because it’s a different service outside the scope of what we normally do,” Fife said. “(The club members) are very energetic, they have great ideas, and I think they’ll serve their community well.”

Co-founder Debby Horner said the club is diversified with its human members as well as the canine ones.

Horner’s own dog, Luna, is a two-year-old White English Cream retriever, and Tedino’s dog, Finnegan, is a golden retriever. Another member, Sandy Healey of Seekonk, has two Pomeranian-Papillon mixes, Gizmo and Pepe.

Healey said it was “rewarding” for her and her pets to be part of the Paws of Comfort.

“The dogs give you so much love — why not share it?” Healey said.

It took less than a year for the therapy dog group to be chartered. At the Shrine in June, the club’s service dogs received a blessing during a service celebrating their formation.

However, coronavirus regulations for visitors in nursing homes and schools — two places where service dogs can especially be of use — has postponed much of the community service work that is in the spirit of the Lions Club.

Horner, who worked with Tedino to get Paws of Comfort going, said that prior to the pandemic, the club had a “long list” of places to go to bring comfort with their four-legged friends.

“It is time,” Horner said. “We want to get out there and accompany people with these dogs.”