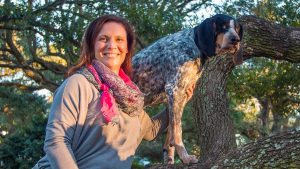 In the weeks leading up to a heated presidential election, another close race played out that had dog lovers across the country faithfully voting online every 24 hours for their favorite furry friends. For four weeks, from Sept. 10 to Oct. 9, nearly 1 million votes were cast in Garden & Gun magazine’s Good Dog Contest.

In the end, out of nearly 12,000 canines entered in the contest, it came down to just two dogs who were neck and neck for the lead – Oscar the Blind Dog, a bluetick coonhound from Mobile, and a puckish-looking blue heeler from New Jersey named Hank. The final tally: 45,238 votes for Oscar and 44,054 votes for Hank. The next runner-up, Lilly, a standard poodle from Florida, had fewer than half as many votes as either Oscar or Hank, with 20,641.

Oscar licked ’em all, just as his supporters believed he would.

When Greene heard about the contest, she decided Oscar might have a shot at winning. She chose the perfect photo – Oscar standing on a low branch of an ancient oak tree in Washington Square, right in the middle of the Oakleigh Historic Garden District – and did her best to encourage others to vote for her sweet, blind pup. Her Facebook posts, each accompanied by an adorable photo of Oscar, told his story, from how he lost his eyes when he was an 11-week-old puppy, to how much he loves his “brother” Charles, to his fondness for burgers from Callaghan’s Irish Social Club.

For many, the voting process was something to look forward to every day.

Tom Andrews, another friend of Greene’s, shared a heartfelt post about Oscar:

“He’s gregarious, never meets a stranger, he’s nearly fearless and lives life with a joy that any of us would be lucky to experience,” he wrote. “Better than all that, he shares that joy freely with all that he meets. You cannot walk away from an interaction with Oscar without having had your day improved.”

Greene and Oscar were invited to a virtual Mobile City Council meeting via Zoom. When Mobile Mayor Sandy Stimpson mentioned Oscar in his online newsletter, Jenn couldn’t help throwing a little shade toward his closest competitor: “There’s no way Hank’s mayor is showing him this kind of love,” she commented on Facebook.

As the winner of the most votes, Oscar was named top dog in the readers’ choice category. Another dog, Dylian, a pool-loving Chesapeake Bay retriever from El Paso, Texas, was selected by editors of the magazine as the overall winner.

While Oscar hasn’t met any of the dogs he competed against, he harbors no ill will toward any of them. It seems he’s never met anyone he didn’t like, whether it’s a human, another dog or a cat. “He doesn’t have a mean bone in his body,” Greene said. “He doesn’t get aggression – growling or barking. He thinks it’s a call for love.”

In the eight years since she moved to Mobile from Boston in 2012, Greene has become a shining light in the community. She has co-founded two nonprofit organizations: the Delta Dogs, which raises money to help low-income residents take care of their pets. Her “day job” is working for the city of Mobile as acting director for programs and project manager, working on large-scale infrastructure and livability projects like the Three Mile Creek Greenway Trail, St. Louis Street rehabilitation and Langan Park Lake dredging and environmental restoration.

Though she’s known for her love of dogs and her commitment to rescuing animals of all kinds, from birds to cats to, just last week, an injured pelican on the Interstate Highway 10 Bayway, Greene didn’t grow up with dogs. In fact, she’d never had one until she moved to Mobile, where she knew no one. She found Charles, a hound mix, at a rescue event, where, as the dogs around him barked and growled, he looked at her casually, paws crossed, “like, ‘Greetings,’” she said. They’ve been inseparable ever since.

Charles was a search-and-rescue dog until he was paralyzed in a training accident three years ago. Greene nursed him back to health. Now white-faced, he has cancer but still manages to accompany Greene to work at the Delta Bike Project.

A year after adopting Charles, Greene found Daisy at the county animal shelter. Daisy had suffered mistreatment and extensive injuries over the years, and Greene became a familiar sight at events around Mobile with the regal purebred redbone hound riding in style in her converted bike stroller.

Once she had Charles and Daisy, Greene got involved with the American Black and Tan Coonhound Rescue organization. “I have lost track of how many I’ve fostered,” she said, guessing it’s about 50 dogs.

Last year, Greene got a text from Trisha Davis, the director of the Monroe County Animal Shelter in Monroeville. “She’s amazing,” Greene said. “She does so much with so little.” When Davis texts, Greene knows it’s because there’s a hound in need.

“The text was just a photo of Oscar at 11 weeks,” said Greene. “It was horrible.” The puppy had been surrendered by a breeder and was suffering from congenital glaucoma. One of his eyes had fissured down the middle.

“He must have been in terrible pain,” she said. “But hounds are tough.”

He went straight to Dr. Jennifer Wilder, Greene’s best friend and partner in Delta Dogs, at Ark Animal Clinic, where he was stabilized. She thought she might be able to save one of Oscar’s eyes, but ended up having to remove both of them.

Greene agreed to foster Oscar but soon knew she had to add him to her little menagerie. She remembers the sound of his howling in the kennel as he recovered from surgery, “in a little tiny baby hound voice, with his eyes sewn shut.”

During surgery, the veterinarian was able to expertly leave two brown patches of fur right where his eyes would be. So sometimes it’s difficult to tell that not only can he not see, but he has no eyes at all. He wears a thick collar that says “Blind Dog,” but occasionally he’s still mistaken for a seeing-eye dog. Greene explains that she can see, but he can’t – she’s his seeing-eye human.

Shortly after Greene brought Oscar home, Daisy died of pneumonia at 18. It was almost as if the old girl waited until her mother had another companion to take over before she departed. And she left Greene in good hands – er, paws.

Even though he can’t see with his eyes, Oscar “sees with his heart,” as Greene told Garden & Gun magazine. He’s smart and has mastered 25 commands.

He goes into the front yard with Charles and knows to stop before he gets near the street. And while he might try to lope along behind anyone who walks by, he always comes back when Greene calls him.

“Everyone is drawn to him,” she said. “He is so loving. He never has a bad day unless he’s in trouble, like when he ate five pounds of dog food. He’s just such a sweet boy. He has no idea he’s blind.”

The 72-pound dog enjoys running, going on hikes and riding in a boat in the Mobile River Delta with Greene, and he’s learning how to swim while wearing a life jacket. “He’s up for anything,” she said. “He’s good off-leash and listens very well.” At the Delta Bike Project, he is the “emotional support dog,” giving out hugs to “anybody who asks.”

Since he won the contest, he has become a celebrity around Mobile. At a recent visit to the nearby dog park, Greene overheard two people whispering, “Is that Oscar?” People walking by her house will shout out to him, “Congratulations, Oscar!”

For his celebration dinner, he enjoyed a Conecuh sausage burger at Callaghan’s. “He was super pumped about that,” Greene said. “Oscar has no idea about fame, but he loves attention. He was blissfully unaware of how much joy he was giving Mobile, how much fun people had.”

On a recent afternoon, Greene sat talking on her blanket-draped couch.

Curled up beside her on one side was her current foster dog, Jubilee, an elegant, elderly bloodhound with epithelial cancer who recently suffered a stroke; on the other was Oscar, “still a giant puppy,” who lay with his head between two of the back cushions, sound asleep.

“Just because a dog is a little different or has health challenges doesn’t mean they can’t be saved,” Greene said, nodding toward the three dogs sharing the sectional with her.

Oscar’s only reward for being named the readers’ choice winner in the contest is “15 minutes of fame and hugs from the whole world,” she said.

For Greene, the contest has given her “a good opportunity to talk with people about dogs who are different,” she said.