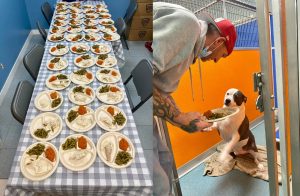 About 80 dogs and over 150 cats at the Stevens Swan Humane Society in Utica, NY got a special Thanksgiving meal last week thanks to local couple Rob and Hillary Dunn.

Rob has worked at the no-kill shelter for the past nine years and Hillary has volunteered there for the past five. The shelter is how they met. Now, for the second year in a row, they have worked overtime to continue to give to the Stevens Swan community.

Each dog got a plate of plain white meat turkey without skin or bones, canned and no salt added green beans, and plain canned pumpkin.

“To be clear, this isn’t food you would cook for yourself,” Hillary said. “It has to be very plain, not like table scraps.” The Dunns, who mainly work with the dogs at the shelter, cooked the meals on their own time in the days leading up to Thanksgiving. Being just a two-person operation, making turkey for all of the animals was hard to make happen, but Hillary said they were able to serve plain pumpkin to the cats.

“It’s actually great for them. A lot of them really liked it,” she said.

The couple has six dogs of their own, all of them adopted from Stevens Swan. Hillary said while they did not get a meal served on a plate, they were tasked with the very important job of being the official taste testers. The story of the Thanksgiving dinners that the Dunn’s has been shared on local and national media outlets, raising awareness of the shelter and their pets up for adoption.

Hillary said the shelter has been closed to foot traffic for months because of the coronavirus pandemic. Those interested in adoption now have to fill out an application online and if it is approved, an outdoor meeting is set up at the shelter.

With the decrease in foot traffic, the Stevens Swan team has been trying to think of creative ways to raise money to take care of the animals. They recently launched a Stevens Swan clothing line with every day and holiday themed items.
Share  Tweet Copy URL