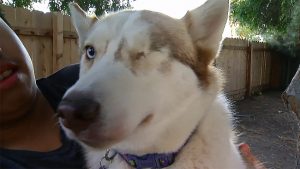 The California Department of Corrections and Rehabilitation (CDCR) has confirmed an Oceanside Navy veteran convicted of torturing his neighbor’s dogs was released on Monday, months ahead of schedule, due to the coronavirus.

David Herbert, an honorably discharged disabled veteran who was found guilty on six animal cruelty charges in the brutal torture of two Huskies and the death of a golden retriever, was sentenced to nearly nine years behind bars. He has served just 17 months.

It was unclear where Herbert would live following his release. The Oceanside Police Department said they were not notified of that information, and that it would not likely become publicly available.

Herbert was eligible to reduce his sentence by 50%. He was also given two years off his sentence for time served. Even with the reductions, Herbert was set to serve 28 months in prison. His parole release was scheduled for February 2021.

CDCR said that Herbert was eligible to be released even earlier because his parole date fell within an emergency measure to reduce the prison population due to COVID-19. The policy allowed nearly 9,000 incarcerated people to be released ahead of their parole dates.

Michelle Plaketta lived next door to Herbert. Upon hearing that the man who killed her golden retriever would be released from prison, she told NBC 7 she has been overcome with fear.

“In the last 24 hours, I have not slept,” said Plaketta, a mother of four, who has moved twice now because of her former neighbor Herbert. “I have not been able to eat. I fear that somebody will break into my home to hurt my children. When he was still out on bail, I was always looking over my shoulder.”

In May 2017, Lala, the therapy dog of Plaketta’s daughter, went missing just two days after Plaketta’s family moved in next to Herbert. After a lengthy investigation, it was determined that Herbert killed the golden retriever.

“They found blood on a baseball bat and her blood inside his vehicle,” Plaketta said. “It was heartbreaking, definitely, to know the last moments of her life ended in that kind of act.”

Herbert was also found guilty of gouging out the eye of Maria Morales’ husky Estrella and throwing acid in her other dog’s face. The Morales family rented the house next to Herbert’s before the Plakettas.

“You see it in horror movies — you think that that’s what is a horror movie,” she said. Both the San Diego County District Attorney’s Office iand the Oceanside Police Department in statements to NBC 7 ahead of Herbert’s early release said they were not consulted by CDCR.

District Attorney Summer Stephan was critical of the CDCR’s decision not to involve their office in the decision-making process.