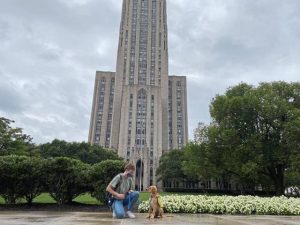 Jessica Gardner rolls herself to the dryer.

But with cerebral palsy, it’s difficult to pull the clothes out. She looks down at her power wheelchair. Her best buddy comes to the rescue.

Ford, a Labrador golden retriever cross, has been by her side for four years. The two were matched through Canine Companions for Independence. Headquartered in Santa Rosa, Calif., it’s the largest non-profit provider of assistance dogs.

“I remember the day I met Ford like it was yesterday,” said Gardner, 34, of Johnstown. “It was an instant connection. I don’t believe in love at first sight, but with Ford, I do. He was drooling, and he wanted to get close to me.

“Ford is my angel, with fur, instead of wings. He and I are a match made in heaven.” To help create other such matches, a national dog friendly event called DogFest raises money and encourages volunteers to help provide trained service dogs to people with disabilities free of charge.

Because of the pandemic, this year’s event will be held virtually from noon to 5 p.m. on Sunday, Sept. 13 via Facebook. It will include a live-streamed tour of the North Central Region’s new training facility in New Albany, Ohio, and also demonstrations of the work done with the dogs.

The Pittsburgh group normally attends DogFest in Medina, Ohio. It has raised $23,000 and hopes to reach $25,000. Donations will be accepted through the end of the September to be counted for DogFest.

Seeing the initial meeting between person and dog is emotional, said Derek Hought, of Bradford Woods, leader of the Pittsburgh group. He and his wife, Nanette, are puppy raisers, which requires making sure the animals are in a loving home, teaching them basic commands and taking them to formal obedience classes. Another local puppy raiser is Nicole Mroz, a junior psychology major from Buffalo, N.Y., who is also learning American Sign Language at the University of Pittsburgh. She is president of the service dog education and training program at the university, called Steph Pitt. She and a puppy, Noni, spend a lot of time walking around campus. Noni is one of four puppies being raised at the school. Mroz said her responsibility is the first step in the animal’s journey to be an assistance dog.

“It’s been an amazing part of my undergraduate experience,” Mroz said. “I would not trade it for the world. I treasure the time I have with the puppies. I know as much as I love them that they will take on such an amazing role in someone else’s life.”

Puppy raisers care for the animals from 8 weeks old to about 17 months, teaching them basic commands. The dogs receive extensive instruction for six to nine months at the training facility. Once a person and dog are matched they receive two weeks of one-on-one training to make sure the animal can do what the owner needs. “At the graduation ceremony where you see a puppy with someone with a disability, it’s so rewarding because these dogs change that person’s life,” Hought said. “They can change an entire family’s life. There is not a dry eye in the room.”

Ford changed Gardner’s life, Hought said. The dog is trained to lift a footrest on a wheelchair so Gardner can transfer independently. He also knows how to pull her socks off, open doors and grab items out of the refrigerator.

“If I drop something, he can pick it up. I don’t have to worry about asking a stranger to do it who might have ill intentions,” Gardner said. “He’s given me security, which is life changing and honestly, that is an awesome feeling.”

She said Ford has given her confidence to embrace new opportunities, such as the Ms. Wheelchair Pennsylvania competition. She was runner-up last year and will take over the crown Oct. 18 since covid-19 forced the cancellation of this year’s event. Her platform is stopping service dog fraud through education advocacy and working with legislators. “People think of it as a beauty pageant, but it’s about advocacy and empowering women with disabilities,” she said.