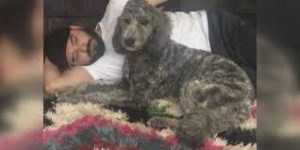 A Panhandle veteran is overcoming his recently worsened PTSD with the help of a new best friend.

What seemed like a normal drive home from work for Jose Flores turned into a PTSD nightmare.

A Dumas fire he drove by brought back some of the horrors he faced fighting overseas for our country.

“The smell just brought me back to when I got blown up in Iraq, just that smoke, just brought back flashbacks. I thought I was there, I was alone at the time and I kind of panicked,” said Jose Flores, baseball instructor at D-bat.

The effects of that fire carried over on a few weeks as Flores was found crying in his office by colleagues.

“It was a surprise to us, and we started paying more attention and being a little more considerate,” said Robbie Wine, owner at D-bat.

Wine and his wife knew they had to help a struggling friend.

So what they did, was raise over $5,000 in two days from family and friends to surprise Flores with a new service dog this Christmas.

“Just to see everybody rally behind me and help me get this dog, it meant a lot to me,” said Flores.

“We get to hear a lot of stories from our veterans and they tell us our struggles and every single one of them. This one is special, its local, its home,” said Joshua Brown, co-founder of Freedom Fur.

From day one, the two have had an instant connection.

“I eat, she’s under the table with me, I go to the bathroom, she’s waiting for me at the bathroom, everywhere I go, she’s following me,” said Flores “She has been here the last few days helping out with camp, so she’s been really good, stays by my side, couldn’t ask for anything else.”

“If we can help one person, that one person is going to help 28 kids playing around her,” said Wine.

He recommends all veterans ask for help if their going through problems.

“Pride is not a thing, just go ahead and reach out, if you need help. Let someone know, there’s people out there willing to help, if they don’t know, they can’t help you,” said Flores.

“Asking questions really helps, and the support staff and people supporting people like Jose going through what he’s going through just makes it all easier for him,” said Wine.