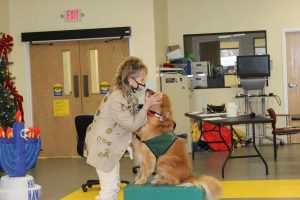 “It is always a sad event when a beloved canine companion passes away. When a service dog leaves its person, the effect can be devastating to the person, and often to the entire family in life altering ways,” said Lu Picard, ECAD co-founder and director of programs.

“It’s like, in relatable terms, to being told you no longer have a divers’ license. Remember the sense of freedom you felt when you got your first drivers’ license – with it you were could hit the road, go new places, see new things. You were free,” Picard continued. “For a person who has had the assistance of a service dog for a number of years it is the same: they are grounded, with little freedom or help in their daily life, the routine their trained canine allowed them to have.”

Picard also said that, when pairing a successor dog with a client, she makes an effort to reduce the “comparison” factor. While this is natural, Picard wants the clients to realize that the new service dog, while having the same skills, may have different personalities from the former. Also, the successor service dog will be close to two years old, where the client will have become accustomed to an older helper.

The clients receiving Successor service dogs in December represent a variety of disabilities and needs.

Kevin Conlon, of Queensbury, NY, is a veteran who served two tours of duty in Iraq, and a graduate of ECAD’s Project HEAL Program.

Anthony Turturro, of Brooklyn, was a teenager riding a bike when a speeding car hit him, throwing Anthony up in the air, effectively ending forever Anthony’s life as he knew it. As a result of this tragedy, Turturro suffers from TBI and physical injuries that affect his mobility and balance. Turturro also lost the ability to speak clearly.

Carolyn Sires of Branford and West Haven and her first ECAD Canine, Blue, were known throughout the state for their advocacy work on behalf of veterans. service dog Victory will continue to work alongside Sires in this capacity.

Advocate is Demeule’s third ECAD service dog. Born with cerebral palsy, Demeule credits Ali, his first, with getting him out of his wheelchair and walking with just a cane. His second, Sprinkles, helped him daily when they went off to college. Now Advocate will help him climb the stairs to his apartment where he lives and works as an academic advisor for on-line students at Southern New Hampshire University. Demeule credits his service dogs with helping him to overcome the stereotypical impression most have of people with his condition.

Irizarry has issues that cause crippling anxiety and panic attacks that can lead to disassociation. With service dog Zen she will be able to lead a normal life on her terms, just as she did with Mickey, who helped her each and every day. In an interesting twist, service dog Mickey was paired with Irizarry’s daughter, Karla, when Karla was 13 and dealing with multiple mood disorders. Within a short time, Karla had become an honor student and a Special Olympics star. As her need for Mickey lessened, her mother’s need increased. Mickey worked miracles for both. service dog Zen has jumped right into Mickey’s giant paw prints, according to Irizarry.

In October, facility dog Disney was placed with handlers from the Putnam/Northern Westchester BOCES in Yorktown Heights, NY, where he will help students, particularly those with special needs. In December, facility dog Peace was placed with handlers from the Child Abuse Prevention Center in Poughkeepsie, NY. Peace will comfort and help children who have been traumatized and/or abused.