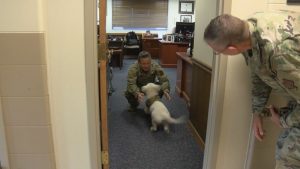 The Iowa National Guard has recruited a new member for their team… one with four legs and lots of love to share.

His name is Lincoln, and he’s a 13-week-old English Cream Golden Retriever puppy.

Lincoln, one small dog, with a big job ahead… providing help, hope, and healing at the 185th Air Refueling Wing.

“They are just accepting, they are loving no matter what, and it just brings a different atmosphere wherever he is at, and it really shows,” said Steve Peters, Chaplain/Lt. Col with the 185th Air Refueling Wing.

Lincoln joined the 185th care team nearly a month ago. Right now, he’s being trained to become a therapy dog.

His job will be to offer emotional support for servicemen and women.

“This program for therapy dogs has developed as a tool to help reduce their stress and anxiety and help them focus, and perhaps unlock the abilities to get in touch with emotions and feelings that they are having that are impacting their day to day life,” said Peters.

“Lincoln, or therapy dogs in general, become a barrier breaker. He is the kind of guy that someone comes in and sits down and says I want to come see Lincoln today, and they come in for that purpose, and they are sitting there, and playing and petting them, and then all of a sudden they start talking,” said Peters. “I go, ‘okay I get it,’ and it’s fantastic to see when that happens, and it happens all of the time.”

While Lincoln still has months of training ahead, he’s already won the hearts of his co-workers.

Lincoln came from a kennel that breeds dogs to be therapy dogs. So, he’s been ready for his career as a therapy dog since the day he was born.