Jenny And Her Companion Koda 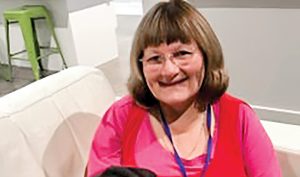 JENNY Angliss-Goodall is developing a special relationship. It is one of co-dependency and is not her first.

The last one lasted 12 years and, when it ended, she felt as though she had “lost my right arm”.

Heartbroken, but realistic enough to know that nothing lasts forever, Angliss-Goodall set about finding a new partner.

The loss more than two and a half years ago of her assistance dog, Dudley, left a huge gap in her life.

“We did everything together: from helping me around the home picking up anything and everything that I dropped – hair brush, shampoo bottle and even soap,” Angliss-Goodall affectionately recalls.

Dudley helped with everyday chores such as washing clothes and visiting the supermarket where he would pick up dropped items. He was also an active companion for swimming at Mothers and Mills beaches at Mornington, going to the movies and live shows, the tennis, going to Adelaide by train (“the only stop where someone could get off was to let Dudley have a pee at the half way mark”) and travelling with a camper trailer to Kakadu National Park and Uluru. Dudley had been a cabin passenger on at least 20 domestic flights.

Dudley was also well known to the hundreds of people at beach days organised by the Disabled Surfers Association Mornington Peninsula branch, of which Angliss-Goodall is a foundation member and former president.

“I could walk with crutches and my trunk was growing normally but my legs weren’t,” she says.

“They wouldn’t amputate [someone with my condition] these days as they can do a lot more with early intervention, even doing tendon transplants.

“I persevered with the artificial legs for 10 years, but in the end it was too difficult. You can look as a good as the next person, but you’d be propped up.”

Angliss-Goodall says being sent to a special development school is another aspect of her upbringing that would not occur today.

“Dudley was such a seasoned sociable dog, our bond was strong – we adored each other,” Angliss-Goodall said.

“The sad part about owning a dog is that their lives are short. As Dudley aged, I was determined that I was never going to let him suffer. How could I after all he had done for me over the years?

I was not going to wait until he could not walk, I wanted his dignity to be intact.

“People ask how you know when it’s the time for my dog to leave this life. I can assure you, if you know your doggo well, they will tell you it’s time for them to go. It was it hard, devastating, heartbreaking – it broke my heart.”

Angliss-Goodall was alongside the vet “thanking, kissing and cuddling Duddles … as he slipped away”.

“The first year and a half was terribly hard – I’d lost my right hand.”

Angliss-Goodall eased her pain by volunteering to do temporary care for the Dog’s for Kids, an organisation that provides assistance and therapy dogs for children whose everyday activities are restricted by physical, intellectual, sensory, social and emotional challenges.

While Dudley was still alive but retired, Angliss-Goodall trialed a possible replacement. However, Walnut, a 14-month-old Labrador, proved to be a “random barker”.

He was given “advanced training” but persisted with barking and so was placed with a family which has three children and his life involves going to school as a therapy dog.

Two and a half years after losing Dudley, Angliss-Goodall was called by Assistance Dogs Australia to say “they had a puppo that they thought was a good match for me”. It was, like Dudley, a black Labrador.

“They told me that he was tall, dark and handsome and his name was Koda, just what I needed, me having short arms and not a long reach.”

A problem arose. The coronavirus pandemic was restricting travel and so Koda has to fly solo, so to speak, from Sydney instead of being accompanied by a trainer.

“Usually the trainer and dog come together and stay for one week to train me and the puppo how to become a well working team,” Angliss-Goodall said.

However, Koda was met on arrival by trainer Kristen Papay, who brought him to Angliss-Goodall in Mornington.

In some ways it was a double homecoming for Koda as the two year old was born in Aspendale.

“To say that I was excited was an understatement, I was doing all sorts of things to keep me distracted until they arrived,” she said.

“When they walked through my front door it was love at first sight. Koda is tall, has a shiny coat, the most beautiful face, the kindest eyes and a big blobby nose that I love to kiss. I am teaching him how to give me eskimo kisses.”

Settling in to his new life and home involves lots of cuddling on the couch “which helps remember, with our bonding”.

Koda’s “job” at his new “forever home” is not ignored.

“There is a serious side to Koda’s and my partnership, which is to help me, make my life easier and give me confidence that when I am out and about that he will be there for me,” Angliss-Goodall said.

Among his responsibilities are to “pick up anything and everything: my car key’s if I drop them, money or my credit card, pass me the toilet paper and anything else along the way”.

Dudley – remember, he was a Labrador – would pick up a piece of dropped cake and return it to the table. Whether or not Koda will find temptation that easy to resist is yet to be seen.

But that’s a test Angliss-Goodall does not see as being the most important to their relationship.

“Koda will be my companion through this wonderful journey of life,” she said

“Although there will never be a replacement for Dudley, what I do know is that I already love this beautiful boy and, without a doubt, our love and admiration for each other will continue to deepen.”