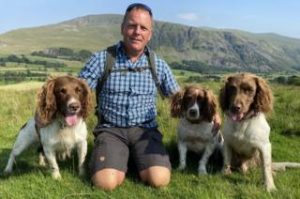 Tewitt Tarn is an idyllic pond high in the hills above Keswick in Cumbria.

To the north are the imposing green and grey cliffs of Blencathra, to the south, glazed in the haze of hot summer days, the steep slopes of Helvellyn.

The shimmering water is serene, the surface faintly ruffled by the soft breeze that lazily drifts and dances its way through the Lake District.

And then, with a splash that sends a snipe and three gulls soaring out from the rushes, Max, Paddy and Harry arrive.

The three dogs certainly put the spring in springer as they launch themselves into the water, chasing a hefty stick thrown from the shoreline by their owner Kerry Irving.

The trio have become an internet sensation, twice daily Facebook Live videos of them enjoying their walks and swims being watched by hundreds of thousands of people around the world during the coronavirus lockdown.

“It was a pure mistake,” Kerry says, as we are showered by three enthusiastic spaniels shaking themselves dry.

“I was trying to take a picture and accidentally started a video. Suddenly people were watching and I realised that my dogs were giving a lot of joy to people.”

Kerry understands the joy they bring; it was the same joy Max first gave him 12 years ago that he says saved his life.

In 2006 his car was rear-ended by a lorry, leaving him with crippling back pain.

He spent the following two years barely able to move, declining into a deep and seemingly irreversible depression.

Then one day, having been persuaded by his wife of 22 years Angela to walk to the local shop to get some milk, he met Max.

The then one-year-old poked his nose between the bars of a backyard gate and the two struck up an instant friendship. Kerry suddenly had a purpose to go out – to see Max.

Max’s owners were struggling to give him the time he needed so were happy for Kerry to take their dog out for walks.

“It’s always been about the eye contact with Max, the way he looks at you and you just feel he cares,” Kerry says, as Max sits a short way away, appropriately enough gazing at us as a soggy stick hangs from his mouth.

With the confidence instilled in him by his new canine companion, Kerry, who had trained as a butcher and been a salesman of farming equipment before the crash, decided to retrain as a locksmith.

Max became his “head of security” and joined Kerry in his van, and when Max’s owners said they were moving to a city but thought their dog would have a better life in the country, Kerry leapt at the chance to become his friend’s full-time carer.

He started putting pictures of Max on his business’s Facebook page and found that, perhaps not unsurprisingly, people were more interested in snaps of a spaniel than they were images of deconstructed locks.

Kerry started a separate page for Max, and that’s when he realised the soulful stare that had helped him was also providing comfort to others around the world.

“I started getting all these messages from people telling me how just seeing pictures of Max cheered them up,” Kerry says, as we stroll in the shade of the rocky outcrops of Low Riggs. “And they started telling me their problems too.

“I understand it – if you see someone with a dog, they already seem friendlier. We stop and talk to people who have dogs, and something about Max just made people open up.

“I never used to want to talk about depression, but now I’m perfectly happy to because I have found that just talking about such things lifts them off your shoulders.”

Max is limping alongside Kerry as we walk and talk, his gait the result of suffering a broken leg when a labrador barrelled into him five years ago.

Paddy and Harry, companions Kerry acquired in 2017 and 2019, are trotting around in large circles, noses to the ground.

We are meeting the day after Max’s 13th birthday, an event which saw more than 1,000 birthday cards cascade into his Keswick home.

Many contained donations to the PDSA, a charity for which Kerry and his canines have raised more than £244,000 in the past three years, £100,000 of which has been raised in the past six weeks through events including climbing Ben Nevis.

“We get asked to help so many charities and while I would love to help them all, we just can’t,” Kerry says.

Their fundraising and spirit-raising have seen them win awards and earned Kerry, Angela and Max a visit to a Buckingham Palace Garden party in 2019, where Max wooed the Duke and Duchess of Cambridge.

Max tends to charm anyone who meets him, which is why Kerry had him registered as a therapy dog and why Keswick Town Council has just approved plans for a statue of him in the town.

As Kerry recounts in his memoir Max the Miracle Dog, they once arranged a surprise meeting with a woman who had terminal cancer.

She had enjoyed watching the dogs online so, unbeknown to her, her family arranged for the dogs to be waiting to greet her when she visited Castlerigg, an ancient stone circle on the edge of Keswick. The meeting made a big impression on Kerry too.

“She gave me the best advice I’ve ever had,” he told me, and it’s easy to see how her words of wisdom relate to his own story.

“Don’t make a bucket list, a list of things to do, but rather a bucket of memories.

“Whatever it is you want to do, just get on and do it.”

On a hot sunny day with no cloud cover, it’s not a good idea to walk the dogs – or a normally deskbound journalist – too far, so before too long we head back towards our starting point.

Kerry still has to watch every step he makes as a result of his injuries, and is mindful that his back pain could come back at any time.

But being out with his dogs is happiness.

“Look at them,” he says, as they circle us, sniffing their way across fields and through large tufts of long grass that obscure all but the tips of the dogs’ tails from our view.

“You cannot go for a walk with a dog and not just feel happy.”

At the end of the walk I give Kerry a pack of tennis balls for his dogs, a belated birthday present for Max.

Kerry laughs, the same snort he gave when I had asked if they liked going in the water.

He rips open the bag of balls and bounces two out, much to the delight of Paddy and Harry.

By this time Max has already got into the back of Kerry’s van and is lying on his bed, his eyes half-closed, his tongue lolling from his gently panting mouth.

He’s not the same sprightly springer spaniel he was a few years ago, but he looks content.

Having retrieved the luminous green balls, Paddy and Harry join the elder statesman in the van. With a cheery farewell, Kerry clambers into the driver’s seat and heads off, back over the hills towards their Keswick home.