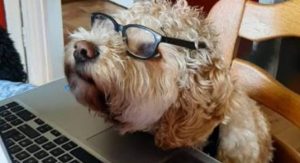 St Mary’s Special School in Rochestown is one of many reopening its doors today for the first time in months.

Since the school’s closure to 64 students and 25 staff, students have enjoyed daily check-ins with their therapy dog Begley who has been helping both children and staff for over a year.

Now, the school is prepared to return to what is a new norm after working “really hard” to make the school “a safe and happy place for our students to return to”.

Principal of the school, Kerri Hollywell, said that due to Covid-19, Begley has been furloughed “as he is not able to sanitise his paws” but will return to the school as soon as it is safe to do so.

Staff have been clearing their classrooms and preparing the school’s first aid and isolation rooms ahead of reopening today.

The school’s lunchroom has been moved to its larger hall and has been cordoned off into sections to keep each class pod separate and allow for social distancing with a one-way system also in place throughout the school building.

“We are lucky that we have beautiful grounds that we can take advantage of, hopefully in the sunshine but with a proper coat we’ll try to get out in the bad weather too. We will be walking a lot and even hopefully taking lessons outside where possible,” Ms Hollywell said.

She said that one downside to the new rules for schools is that the school’s soccer coach “will not be seen for a while” and swimming lessons have also been postponed.

She said that although staff were feeling “slightly anxious” ahead of returning, that they were also excited to welcome back familiar faces and new students alike.

“We are all looking forward to hearing about all the new things that they have done throughout the lockdown and also getting back to most of our old routines. We will all look after each other by following our hygiene rules,” she said.

Ms Hollywell said she has “really missed” working with her students over the last number of months and that it has been “tough at times” but she is looking forward to some “socially distanced chats and maybe even a therapeutic cup of tea in the sunshine with them all”.

“Fingers crossed for a warm and dry September and we will all learn new ways to be at school and get the best out of it,” she said.