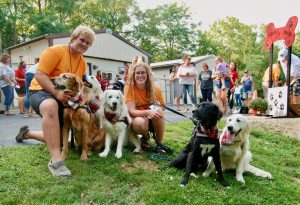 The property at 2400 E. Manogue Road has seen a lot of dogs. One year ago, it was purchased by JoLynn Burden and her children, Callie and Booker, and renamed Kip’s White Dog Inn, after “Kip,” a former family pet and therapy dog who succumbed to illness. Before that, JoLynn said, the property was owned and operated as a kennel by Cindy and Steve Busch, both of whom were on site Wednesday, Aug. 26, when the kennel held an open house to debut its improvements, acknowledge its one-year anniversary and showcase two area rescue organizations. August 26 was also National Dog Day, set aside in recognition of man’s best friend and those in rescue shelters looking for forever homes.

During the open house, some 150 in attendance were offered tours of the inn and visited tables set up by Paddy’s Paws, a Fort Atkinson-based rescue shelter with a sister operation in Texas, and Albert’s Dog Lounge Rescue, Whitewater, catering to senior, special needs and hospice dogs. Jolynn and her family have fostered dogs from both rescues, JoLynn said, including “Rex,” a 3-year-old lab mix who is without the use of his front legs. The family ultimately adopted Rex through Paddy’s Paws and today he is one of five of the family’s canine pets.

Rex, who also holds the title: runner-up in the 2018 People Magazine’s World’s Cutest Rescue Dog Contest, was on hand to greet visitors while receiving hugs and attention.

Several ambassadors from the Milton Area Chamber of Commerce and Forward Janesville arrived to help facilitate a ribbon-cutting ceremony.

Dog enthusiasts were treated to cookies, beverages and booths with myriad dog-themed information and supplies.

Along with Rex, canine VIPs in attendance included two Paddy’s Paws rescue dogs, both of whom are in foster care and looking for forever homes. They also served to help tell the Paddy’s Paws story: Begun in 2014, the organization has placed some 3,000 dogs in forever homes, Paddy’s Paws volunteer Keri Wagie said.  Greeting event-goers was “Shea,” a 2-year-old lab mix who was rescued through the Texas shelter and relocated to Wisconsin. She has spent the last month living with Jodi Allard, Fort Atkinson, who volunteers with the rescue as a foster caregiver and she performs home visits, which, she said, is the last step in the adoption process.

“I have a passion for dogs and I hope we are a stepping stone on their way to forever homes.” Allard said.

Shea is one of 11 dogs at Paddy’s Paws’ Wisconsin shelter waiting for adoption, Allard said. Shea, whom Allard described as “shy and timid at first, but warms up,” and “fully-trained, obedient and well-mannered,” would do best with a family with another dog and a fenced yard, she said.

A second dog, “Angie,” is a 2- or 3-year-old terrier and bird dog mix, her foster caregiver Milton resident Stephanie Cimineri said. She, too, came through the Texas shelter and has been in Wisconsin since March. She is looking for a forever family with a fenced yard, Cimineri said.

A second shelter, Albert’s Dog Lounge Rescue, was represented by its founder and president Mandy Lewis of Whitewater. The organization provides care to senior, special needs and hospice care dogs, she said. Concerned with exposing older dogs to the summer heat, Lewis said, she opted not to bring canine ambassadors.

The rescue is named for “Albert,” a former pet and rescue dog who died suddenly seven months after arriving in Wisconsin in 2016. The organization was formed as a nonprofit rescue in 2017, according to its website.

While dogs came looking for homes, some people came looking for dogs: Twelve-year-old Ella Hollenberger, Lake Mills, made the trip to Milton, she and her parents said, in search of a dog that Ella will train as a support dog to help her manage anxiety. Ella said she was looking for a large- to medium-sized dog that is calm in all environments, social, and a quick learner.

Volunteers conducted tours of the kennel’s improvements, which include, within each kennel, a doggie door and potty area with artificial turf, which, JoLynn said, is better than natural grass for keeping oder at a minimum and it’s easier to clean. Each kennel also has orthopedic, elevated beds.

The five-acre facility offers 17 kennels within three temperature-controlled buildings, with a capacity of up to 30 dogs, JoLynn said.

While the inn caters to dogs, the family has cared for cats on a limited basis in their home. The family lives on the property so they can offer round-the-clock care, JoLynn said.

While JoLynn and her family are relatively new to the property, they are not new to dogs. Over the last four or five years, JoLynn said, the family has fostered some 90 dogs. JoLynn is also a therapy dog trainer, and she and Callie are both certified providers of canine first aid.

“Callie has a big heart for dogs,” JoLynn said. A junior at Milton High School, Callie, JoLynn said, might easily choose a career in veterinary medicine.

Booker, a 2020 graduate of Milton High School, operates a lawn care business and helps out with the kennel, JoLynn said.