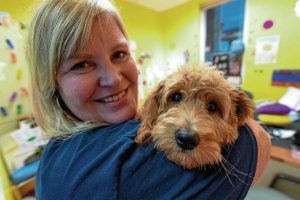 The ultimate teacher’s pet is expected to show up in the near future in Burrell School District buildings: Her name is Stella, a goldendoodle who is a therapy dog in training.

The pet will serve as an aid to support students. Not to mention provide a little fun.

The Burrell School Board recently approved having a therapy dog in district buildings for classes and one-on-one visits with students.

“Stella will be an additional resource to help students surround themselves with good, positive care,” said Mary Balich, a school counselor at Bon Air Elementary School in Lower Burrell.

Stella joins a legion of therapy pets that continue to surge in popularity.

Animal Friends in Ohio Township has its own therapy pet certification program, Therapets, which is continuously sold out with waiting lists, according to Ann Ensminger, Animal Friends chief programs officer. Last year, 88 potential therapy dogs went through Therapets prep classes. The program is on hold because of covid-19 pandemic restrictions.

Stella will be in training until at least next May, when she can be tested for certification as a therapy dog. Balich will bring her to school earlier than that to meet with students and become familiar with the district environs.

The school board liked the idea of the extra help a therapy dog could bring to students.

“The kids will absolutely love Stella,” said School Board President Tricia Shank. “She will light up environments and mental well-being.”

Another fan of therapy dogs is LeeAnn Guido, a school board director and a social worker with the Shaler Area School District who has therapy dog Pepper, a labradoodle, she took to school in 2019 into early this year.

Guido expected the dog to make children feel more comfortable and happy. But there were more benefits, she said.

Guido discovered that Pepper helped enrich the relationship between counselor and student.

The therapy dogs were especially effective in reaching children on the autism spectrum.

“I was seeing kids visit the counselor’s office more than they normally would just to see Pepper,” she said.

The therapeutic effects of petting a dog, such a lowering blood pressure, are well known, Balich said.

A therapy dog can help a student who is suffering through trauma or is having other struggles, Balich said. “If nothing else, Stella will be joyful to be around,” she said.

Bringing calm is one of the major roles of therapy dogs, whether they are helping school counselors or any group of people coping with loss or other struggles, Ensminger said.

Animal Friends’ certified Therapets are used in a number of situations where soothing is in order: in classrooms where children are having difficulty reading, in colleges to relieve stressed-out students during finals and in tragedies to calm people when there is a sudden death.

“We have group that works with children who have lost a parent who meet at a church once a month, but that was before covid,” Ensminger said.

Ensminger hopes to see more dogs in more places in the future while still maintaining integrity in certification. In fact, the popularity of therapy dogs, as well as therapy cats and rabbits drove Animal Friends to offer its own training and certification program.

Certified therapy dogs should be social, friendly, confident, not easily startled, and comfortable in new situation, Ensminger said. Dogs need to know the command “leave it.”

Training and certifications for dogs in general take about six weeks of classes, however preparation can vary greatly, she added.