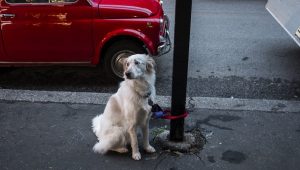 September is Responsible Dog Ownership month. That’s all well and good because you’re probably an amazing dog parent. You stay informed, you follow safety tips, and you do what’s best for your pup.

But there are those other dog parents out there who make things worse for the rest of us. You’ve probably met some, or all, of the irresponsible people on this list who probably shouldn’t have a dog in the first place. Here are some of the most annoying dog parents that we can all agree are the absolute worst.

The ‘I DON’T PICK UP POOP’ Dog Parent

It’s great that you have such delicate, pristine hands that dare not go near poop, but germophobes should probably not be dog parents.

Dog poop spreads diseases between other dogs. So when you don’t pick up your dog’s poop, you’re putting every other dog at risk. It also attracts rats and pests, which bring even more diseases into the area.

Having a dog can get dirty, and if you can’t pick up poop, you can’t have a dog.

You may have seen these off-leashers around the park or walking down the street. They have no problem letting their pup run over and greet other people and dogs without permission.

It’s great that your pooch is friendly, but not everyone wants to meet your dog, and not every other dog is friendly. You’re creating a risky situation with strangers and other animals where anything can happen. Don’t be that person.

Service dogs are incredibly important for the people who need them. They aren’t just pets; they’re valuable assistants for getting through day-to-day life.

But some people believe they’re above the rules and should be allowed to take their dog anywhere. So they pretend their dog is a service dog or say they need the animal for “emotional support” when they really don’t. Emotional support dogs are necessary for many people, but you’ve probably seen the fakes who ruin it for everyone. These people make it harder for those who actually need service dogs or emotional support dogs. It’s a scam, and it needs to stop.

You probably appreciate good advice. That’s probably why you read a lot of dog articles written by experts and vets. But when you’re not asking for it, unsolicited advice can be downright irritating.

Everyone has an opinion on everything. Even experts can disagree about how dogs should be walked, fed, trained, or cared for.

So when some stranger comes up out of nowhere and tells you you’re holding your own dog’s leash wrong, or you’re not being strict enough, or you’re not asserting dominance properly, you immediately want to tell them to “buzz off” in the least polite way possible.

And the worst part about these know-it-alls is that they tend to refuse to listen to any advice, themselves. Live and let live, and save the advice for your Facebook friends.