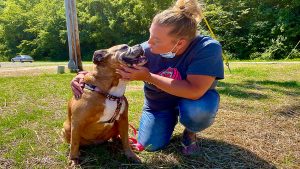 But that is when the Clermont County Humane Society (CCHS) stepped in to help save Sophie’s life and her family from a heartbreaking and preventable loss. The 9-year-old white and tan bulldog-boxer mix, known as a valley bulldog, is stout in stature and is prone to severe ear infections.

And in March 2019, she was in a lot of pain from a swollen, infected ear. However, the 40-year-old mother was in no position to financially help her dog, who she proudly calls a member of her family. “She’s like our child,” she doted. “She’s like our daughter.”

Stephens, of Blanchester, fondly remembers the moment she and her family laid eyes a then-2-year-old Sophie at the Warren County Humane Society shelter in 2013.

She had been abandoned by her owner who could not pay for boarding fees, so she was up for adoption. She had kennel cough and therefore, she could not bark when they first met her at the shelter.

“She kept on wanting our attention,” Stephens recalled. “She wouldn’t give up even though she couldn’t bark.” So, they relented and adopted the dog they lovingly refer to as just a “big baby.”

“She has to be the center of attention—anyone who comes, it’s like, ‘Hey, look at me first.’ She always wants to jump up in your face. She’s a very happy dog,” Stephens said about Sophie, who is also protective of her family, sleeps with them and pretty much just wants to be with them wherever they are.

The “loveable” pooch, who lives for car rides, swimming and camping with her family and enjoys her back end scratched, is also highly susceptible to ear infections.

Last spring, Stephens and her children moved out of their home because of a turbulent relationship she ended, and it took every penny she had to get a place of her own. Then, Sophie’s ear became infected again.

“I knew she was hurting because she was whining and very sore and very red. She was so miserable,” the desperate dog mom said. “It was constantly bothering her, and I just wanted to get her some type of relief.”

But she could not afford the treatment needed for Sophie’s ears, and at that point, she needed to have surgery. So, Stephens started calling around to find out if she could find aid for her “baby.” That is when she received a call from the CCHS, who told her that they could help.

Within two days, Sophie was at Lifetime Pet Center in New Richmond and was prepped for surgery. CCHS paid for the surgery and all of the treatment she needed in full. “I was grateful; I was crying,” Stephens remembered. “I was happy just to get her relief because I knew she was in pain and I couldn’t do anything about it.” Without the surgery, Stephens revealed that the infection likely would have traveled to Sophie’s brain and ultimately killed her.

Today, inside Clermont Animal CARE, Sophie lies on the floor panting with her healthy ears perked up, listening to her owner tell the story about how CCHS saved her life. “She’s just a really big part of our family, and if we would’ve lost her, it would’ve been devastating. She’s one of a kind,” she said.

With her hind legs stretched out behind her, Sophie dons a pink camouflage harness and bubblegum pink leash, matching Stephens’ pink Harley Davidson logo T-shirt. As the two are getting ready to leave, Sophie sits outside in the grass and looks up at the sun with her tongue out. Her brown eyes sparkle and her jowls sag, revealing her bottom teeth, with what could be mistaken for a smile. “I’m just glad Clermont County was there when I really needed them,” Stephens said gushing about the Humane Society’s swift action. “They were there; they were on top of it. They were awesome, and I couldn’t have done it without them.” In 2014, they stopped operating the shelter and focused on what their next step would be for the community and its needs. A year later, they revised their mission.

Its board members reorganized and completely reinvented its vision in an effort to focus on helping pets stay in their homes, because according to their brochure, “when life gets complicated, people more than ever need the unconditional love and emotional support of the pets that share their lives.”

Sue Radabaugh, the CCHS president since 2016, could not agree more and said that their new mission has helped prevent owners from surrendering their pets, or worse: pets dying from needing medical attention like Sophie.

“Most people—if they surrender their animals—are surrendering them because they can’t afford the food, they can’t afford the vet bills, and perhaps they have to go into the hospital—particularly seniors. If they have to go into the hospital and be in the hospital for a while, and they have no other family members available to help them, what do they do? They have to surrender their animal. And that’s probably the biggest, most important companion in their life. So, we thought, we’re going to help there. We will take them temporarily and help them,” said Radabaugh, who has been on the CCHS board since 2008.

While the CCHS no longer operates the county’s animal shelter, they do partner with the Clermont Animal CARE shelter in Batavia, whenever they have someone in need of food, care, boarding or whatever the need might be.

The CCHS supplies dog and cat food, beds, toys and litter, as well as partners with the county’s senior services, who deliver pet food for their residents on their Meals on Wheels route, if they have a pet.

Further, folks who call their hotline in need of assistance are pointed in the right direction based on their needs, she said. They partner with veterinary clinics and kennels within the county to reduce the costs and then pay for those fees for the pet owner.

“Women, who are in battered women shelters or the homeless that are in homeless shelters, they cannot take their dogs or their cats there. So, what are they gonna do? We will take them until they’re back on their feet (and) can find a place to live,” Radabaugh said.

Rayne Colopy, 45, was fleeing from domestic violence last winter when she ended up at a women’s shelter. Against the advice of the women’s shelter, she returned to her house to rescue her blonde terrier-mix dogs, Chloe and Honey, who were tied up outside in the bitter cold. “I said, ‘I have to, these are my dogs,’” she said. But she could not take her beloved furbabies back to the shelter with her.

“If you’re a dog person, an animal person, you do what you have to do. And there was no way I was just going to give them up. That wasn’t an option—it’s never been.”

The shelter supplied her with a list of places to call for help, but it would take about 20 “no, sorry” responses before she reached the CCHS. “It was a Godsend because it was a hard situation,” she said.

And parting with her “children” who she had rescued from shelters within the last few years, was gut-wrenching. “It was hard. It was hard. I really had to trust God that they would be OK, and I knew that they were in good hands here, and that was definitely a difficult thing. Because I did fear, well, what if I can’t get them back? What if things go terrible? But I just had to keep the faith and keep pushing, and I prayed for my dogs every night basically,” said Colopy, who prayed for her dogs every night before falling asleep inside the women’s shelter.

With the help of the CCHS, the friendly duo was boarded at Country Lane Pet Resort in Moscow with a reduced fee that was paid for by the CCHS. They remained there for four months while Colopy was able to get back on her feet.

“It’s amazing; it’s awesome because literally, I love my animals so much. I told the shelter worker at one point, ‘If I didn’t find a place for my dogs to stay, I was going to sleep in the car with my dogs.’ I literally would’ve done anything to accommodate them, whatever I had to do because I was not going to give up my animals because I love them.” Colopy will never forget the day she picked up her girls to take them home in March. “It was like a family reunion, and they were licking me the whole way home,” she said.

And they made a pit stop for some well-deserved treats: McDonald’s hamburgers. “It means everything that they helped me. I’m teary-eyed. I’m so happy,” she said.

To date, no pet owners have had to surrender their animal if they did not want to, said Carolyn Evans, Clermont Animal CARE director, who works hand-in-hand with Radabaugh and the CCHS to help families stay together.

Clermont Animal CARE is an organization that has run the county’s shelter since 2014, when CCHS handed over the reins to refocus their efforts. Since 2018, the shelter’s animal save rates are at 96 percent, which is a record high, according to Evans. In 2011, she said, before her organization took over operations at the shelter, four out of every five animals were euthanized. Clermont Animal CARE is essentially a no-kill shelter because of volunteer foster homes, Radabaugh said.

Further, during COVID-19, the shelter has upped their game to keep animals alive approximately 300 animals currently in their care, Evans said.

“We do everything we can so that they don’t have to surrender,” she said. “We’ve boarded for months. We’ve helped with medical bills. We’ve taken litters of puppies so they can keep the moms,” Evans continued. “That’s the last thing we want is to bring an animal into the shelter. As good as any shelter is, you can have the best shelter, (but) it’s not where an animal should ever live.” In addition to working with other organizations and businesses to help families stay together, during the pandemic, the CCHS has given nearly 70,000 pounds of free food, treats, litter and toys to the community and their pets.

Now, more than ever, dogs are needed in families, Radabaugh said about those who are completely isolated during COVID-19.

“Animals are just therapy. Period. They are wonderful,” Radabaugh said. “Having a cat or a dog that’s there to bother you and nudge you on your leg and, ‘Come on, let’s get going’ or ‘I’ve gotta go out’ or ‘feed me’—every individual needs that kind of need. And animals just fill it. They just fill you up. You can come home grumpy or a bad day, and there they are, ‘Let’s play, let’s go out.’” “It changes your life,” said Radabaugh, who has a rescue dog herself, named, Buddy. “They’re magic. I think they’re all angels.” But the CCHS cannot help pets and their families on their own, because they operate completely through volunteers and donations.