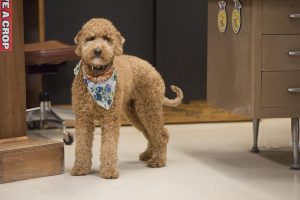 Gracie walks the halls of Lewis Cass as if she owns them. Head held high, she makes her way from one student to another, often cutting a path to a teacher before making her way back to the open hallway.

This is her first year at the school. Even though she can be bashful, for the most part, Gracie is very outgoing.

She has to be. Being confident around people is what makes her so great at her “job.”

At only 1½ years old, Gracie is by far the youngest in attendance at Lewis Cass. Yet, her responsibility is one of the most important – Gracie works as a therapy dog, providing comfort and care for students, especially those who need emotional support.

“We don’t have a mental health program, so I thought Gracie would be a way to help students,” said Gracie’s owner, Jenny Hines, who has served for eight years as the school’s junior-high counselor.

A few years ago, Hines had a puppy that was hit by a car. From that moment, she wasn’t positive that she would ever want a dog, again. However, falling in love with a friend’s mini labradoodle led her to Gracie, a mini goldendoodle.

But, it wasn’t until Hines noticed Gracie’s demeanor with others that she believed her dog would make a good therapy agent. At one of her family’s sporting events, Hines said Gracie wandered away and made friends with an individual who had Down syndrome. Gracie sprawled out next to the person, and the two formed an instant bond.

So, at 6 months, Gracie began taking basic obedience classes and then progressed to therapy training.

“Temperament is very important. She has to understand basic commands and listen very well,” Hines explained to a group of high school students during their Animal Science class Friday. “In fact, she probably listens better than any of my kids.”

Laughing at that comment, the noise jostled Gracie into motion. Meandering her way under desks and rubbing against legs, students were overjoyed when Gracie began visiting them. At the same time, Hines explained the process of training a dog, even inviting ninth-grade student, Maggie Taylor, to issue commands such as “lie down,” “sit,” and “stay.”

After obeying each instruction, Taylor rewarded Gracie with a “good girl” and a head rub.

Hines said petting a dog after a command is valuable because “the pet should be rewarded for behavior.” It helps reinforce technique. For example, she said, “you want to make sure the dog will ‘heel,’ which is making sure she stays close … she is good about staying close to someone in a wheelchair. You don’t want her to jump on people at random.”

Instead, Hines showed the class how to encourage Gracie to jump on them if that would be something they wanted. Almost everyone volunteered to try that command. Laughing at the show of excitement, Heather Smith, teacher of the Animal Science class, said this was the perfect ending to the session the class recently completed on service animals.

“They bring such joy to people,” Hines said of therapy dogs. “I have a neighbor who lost her [loved one] and Gracie goes to visit. She gets rocked.

“A dog has no expectation,” she said. “She just wants you to love her.”

And, it’s that lack of expectation students find helpful during counseling sessions. They don’t have to worry about what a parent, a friend or a teacher thinks, explained Hines. Instead, it’s simply the student with a dog. There’s nothing but friendship, fun and love.

Plus, “if you have an overwhelming day, the dog helps calm you down,” said ninth-grader Kaden Benner.

Emme Grisez, 10th grade, agreed, asking if it would be possible for students to bring service dogs to school.

While Hines thinks surrounding a person with animals sounds like a fun idea, there are requirements in place to have service or therapy dogs in the classroom, she said.

And, said Smith, having a dog in one class might work well, but it might be distracting in others.

Regardless of the situation, though, students see value in having Gracie, said Hines, adding that the shout-outs, the smiles and the cuddles that the kids give her dog are all testaments to that. Even though Gracie helps people in various situations, Hines said that “she doesn’t do anything miraculous.”

For those students who need emotional or mental health support, though, Gracie might just be the miracle they need.