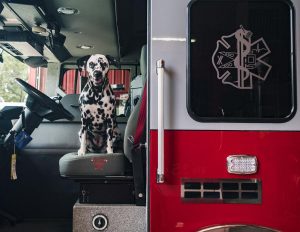 The newest member of the Broussard Fire Department is eager and willing to do whatever it takes to keep up with the rest of the firefighters at the station — even if she does demand a lot of attention and neglect personal boundaries at times.

Ember, a one-year-old Dalmatian, joined the department in July and has quickly become a beloved member of the team.

“A lot of the guys have really become attached to her,” said Broussard Fire Chief Bryan Champagne. “They love to spend some time with her playing around. It’s outside of the normal scope of work. It’s been a positive morale booster across the board.”

Ember spends Monday through Friday at the station and spends nights and weekends at Assistant Fire Chief Dennis Mouton’s home.

Even though she’s still playful, Ember is well trained and sleeps at her bed until it’s time to hop in the truck for a call or even just for a trip to gas up or wash the unit. In her downtime, Ember enjoys ripping apart toys and tug-o-war competitions with Mouton’s wife and three children.

“It was kind of a shock to our routine to bring a puppy home,” Mouton said. “It’s been almost like having another kid.”

Mouton’s family insisted on housing the pup after their first interaction with Ember. “She’s been a wonderful addition to our family, that’s for sure,” Anne-Marie, Mouton’s wife, said. “It was really easy to adjust to her. She’s basically a big lap dog that loves to snuggle.”

Broussard Mayor Ray Bourque has been hoping to acquire a Dalmatian for the Fire Department for more than a year. He introduced Ember at a July council meeting.

“Dalmatians have a long history of working with fire departments and have been especially bred as protectors as well as not to be sensitive to loud noises, bright lights or to fires,” Bourque said at the meeting.

Ember was donated to the Broussard Fire Department by Chad Monceaux, a veteran firefighter who owns a fire and safety business in Crowley.

Bourque envisions the pup becoming a certified therapy dog who comforts children at the scene of fires and other traumatic events.

She’s not quite there, yet, although her existence alone is comforting to many.

“We can easily see her having that effect, just with her being in the vehicle,” Mouton said. “People’s attention goes away from the call to ‘Oh my God, a dog!'”