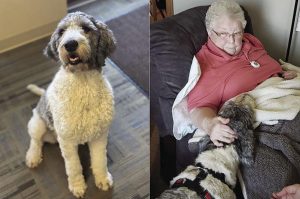 At first glance, she may seem like any other dog. But Molly was groomed right away by Rainbow Palliative Care Social Worker and Chaplain Shannon Finger to become a pet therapy dog.

“When she was eight weeks old, I started exposing her to anything she might have to be comfortable with,” said Finger. “I would walk with her with walkers and wheelchairs and take her on elevators, staircases, through different kinds of doors, and around different kinds of people so that she would be used to anything that would come her way.”

Molly completed both puppy and regular obedience training and then passed the AKC Canine Good Citizen test. That test covers all the basic good manners that dogs should have, including coming when called, and common commands such as sit, stay, come, and leave it, and also, most importantly, reacting appropriately to friendly strangers and other dogs. Shannon also took Molly to lots of public places, including the Rainbow Hospice Care Inpatient Center (IPC) to become more familiar with the sights and sounds of the building.

“The more public places that I could take her, the more she would learn about normal everyday stuff so it wouldn’t make her nervous,” Finger said. “The most important thing is to make sure that she’s safe and that she’s relaxed. Then she will have a good visit with people.”

Molly’s work and preparation were just beginning though. She completed the Advanced Canine Good Citizen program which allows her to do everything off-leash in a public place and not be distracted by toys, treats, other dogs, or people. That took about a year and then Molly had to pass a very rigorous test through a group called Pet Partners to be certified as a pet therapy dog. That test includes a series of exercises that mirror what it would be like on a visit, such as encountering wheelchairs, handling loud noises, and staying calm around other animals and people. Every two years Molly has to be taken back and retested.

Any breed can be a pet therapy dog but it takes a special kind of canine to get through the training. Shannon tried two times previously to train a therapy dog and it didn’t work out.

“Nine years ago I got a labradoodle and we went to training and he was wild,” Finger said. “He just couldn’t be a good therapy dog. I adopted another dog from the humane society and he didn’t really like strangers. With Molly, there’s not a bad person out there in her mind. Therapy dogs just have to love attention from everybody all the time.”

For patients that have had dogs or aren’t able to see them anymore, Molly is a fitting substitute. As Molly dispenses unconditional love, she melts patients’ hearts with her affection and her companionship in the process.

“Most of the time when I take her in, people will start telling me, ‘oh I had this dog,’ and describe how special they were,” said Finger. “Just touching and petting a dog, we know that that lowers your heart rate, it lowers your blood pressure and we know it helps people feel more relaxed and more open. I think she’s like a window to the connections they’ve had with their own dogs.”

“She’s so friendly and loves to take treats,” said Ethel Schlitz, a patient at Lilac Springs in Lake Mills. “It’s pretty lonely here sometimes and when she visits she just brightens my day.”

Patients at end of life are often experiencing a flood of emotions, including pain and anxiety, but Molly brings a much-needed calming presence to their lives. She provides those patients and their families comfort and peace during a difficult time by easing anxiety, and reducing stress and loneliness.

“Listening to the patients and families giggle while Molly is sniffing around them, as they pet her and talk to her, it’s just the best thing in the world,” said Inpatient Center Manager Angie Zastrow. “It is pure and genuine happiness and I truly believe the experience is emotionally healing.”

That’s one of the many reasons that patients eagerly await Molly’s visits with anticipation.

“With one patient I would take Molly to see her at least once a week,” Finger said. “I would lower her bed down and Molly would just lay her head right there on her chest and one time she just had tears rolling down her face. She was just so happy.”

Christine Hinz stayed at the IPC briefly in November 2019. She passed away just over a month later after a battle with cancer. But when she had a chance to see Molly, a special bond quickly developed and helped take her mind off her illness.

“Molly is a godsend,” said Hinz. “She brings the warmness that everybody needs when they’re going through medical issues and no matter what problems people are facing, everybody should be able to benefit in some way.”