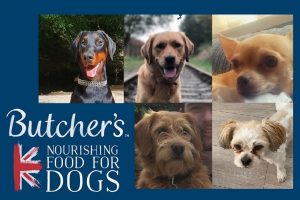 Any dog owner will tell you, there’s a reason our pups are dubbed ‘man’s best friend’, but for some the relationship between pet and owner is that bit stronger.

The past few months have been tough for us all but for those already going through a difficult period in their life the situation has been made that much more trying.

Thankfully in true ‘bestie’ style, our four-legged friends have been there to provide support and comfort.

As part of the Butcher’s Lockdown Dog Heroes competition, we have heard from many readers eager to share the story of life in lockdown with their pets.

And with the competition now in its final stages, we spoke to the owners of our regional winners about what makes their four-legged friend special.

Anna Chandler, 20, from Gateshead lost her dad two years ago, triggering a period of depression and anxiety. However, through the darkness came labrador River who Anna described as her ‘best friend’.

Anna said: “Mum brought her home for me as a surprise and she hasn’t left my side. She is my best friend.

“She picks up on my emotions and she sits on the floor right next to me. She even sleeps in her own bed in my bedroom, I can’t imagine life without her. She’s got me through a lot.”

Originally being trained as a dog for the blind, River passed all her tests but couldn’t make the cut due to a skin allergy. Although disappointing, Anna’s family were smitten when they could welcome her as a member of the family.

Anna added: “Everyone loves River, she is such a chilled out dog. I’ve signed her up to be a pet dog blood donor and to go into care homes when all this is over.

“I’d rather lose my arm than lose her. She’s constantly there for me.”

Osian Morris, of Corwen, underwent major surgery in 2018 after being diagnosed with a tumour on his spinal cord.

To cheer him up, Osian’s parents surprised him with labradoodle, Macsen, and the pair have been inseparable ever since.

Sadly, Osian’s rehabilitation has not been without its setbacks.

Osian’s dad, Dafydd, said: “We’ve had a tough 18 months or so since Osh’s diagnosis and operation.

“He was walking with crutches and slowly getting there but in January three months after his operation in Walton, when he was getting rehab in Gobowen, within a week he lost all feeling and strength in his legs, and the frustrating thing is no one can tell us why.

“Macsen has been the glue which has kept us together and has been so good for Osh in keeping his mood positive when it has started to dip.”

Lockdown has been an especially tough time for Lucy Westgarth from Plymouth after splitting with her partner of five years.

The break-up led to Lucy moving back home to her mum with her loving doberman, Mia.

Through the heartache, Mia has been Lucy’s ‘rock’.

Lucy said: “Having gone through a break-up of a five year relationship during lockdown, Mia has remained my absolute rock.

“She has adapted really well to moving back home to my mums with me and been polite to her new housemate, Andrew the pug.

“Without Mia, I wouldn’t have been so inclined to go out walking every day and we have even started jogging together too, which is great for the soul.”