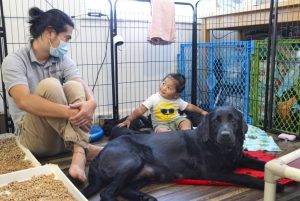 Bonnie Bergin recalls taking family trips as a child from her home in Willits to the Bay Area and stopping at the Green Mill Inn restaurant in Penngrove for dinner.

Now decades later, she is poised to open a new campus for her service dog training institution on the 10-acre property that she and her husband Jim purchased three years ago.

Bergin, who is credited with inventing the service dog for people with disabilities, founded Canine Companions for Independence, the first nonprofit to train and place service dogs. After leaving the nonprofit in 1991, she founded the Assistance Dog Institute, which was designated a university in early 2004 and became Bergin University of Canine Studies.

In 2017, Bergin purchased the iconic Green Mill Inn with the hope of opening a campus for her university within a year. But permitting issues and now the coronavirus pandemic have complicated those efforts.

“I thought it would only take a year to get it open,” said Bergin, who has a doctoral degree in education. “It’s been amazingly difficult.”

Bergin said she expects to have a county occupancy certificate within a week for the campus of modular classrooms and administrative buildings. However the coronavirus outbreak has disrupted education for the 50 students pursuing bachelor’s and master’s degrees in programs such as canine studies and human-canine life sciences.

“As soon as shelter in place came down, we moved to online teaching,” she said. “All the students left.”

The summer and fall programs have moved online, she said. Each student receives a service dog to work with during the semester, and Bergin hopes to host a three-week course with students and their dogs on the campus in mid-July depending on the pandemic. That would be the first class at the new site that operated as a restaurant for 80 years and was a local landmark featuring a green windmill along Old Redwood Highway.

Bergin pioneered the concept of the service dog at Sonoma State University in the 1970s, when a professor challenged her class to identify solutions to help people with disabilities.

She was reminded of the perseverance she’d seen in the disabled community while traveling and teaching with her husband in places like India, Turkey and Pakistan. A dog lover since she had Sport, a Labrador mix, as a child, she began to think about ways to use canines to make a difference.

“I thought about what can be done to help people with disabilities, and I came up with dogs,” she said. “That has been my life ever since.”

Bergin is also involved in several other programs, including efforts to pair veterans with PTSD to service dogs and working with inmates in dentition facilities to decrease recidivism rates.

Amid the coronavirus pandemic, Bergin University will incur a big financial hit to prepare teachers for distance learning, equip students with laptops and disinfect classrooms when students are allowed to return.

Bergin said she has been told that the university will receive $472,000 in federal emergency aid, although she said that she hasn’t seen the money yet.

“Every dine will be spent on safety of our students and ensuring the quality of our education,” she said.