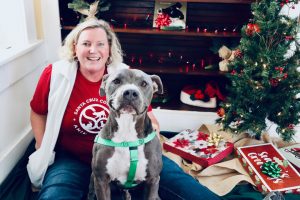 A year ago at this time, the halls of the Santa Cruz County Animal Shelter were filled with the banter of volunteers and the voices of excited people in search of the perfect pet. But these days there’s an eerie silence in those halls, which now echo with the lonely sounds of scattered barks and whimpers.

The relative quiet, however, belies the shelter’s wild ride these past 10 months – a ride that temporarily redefined the shelter’s mission and took shelter employees and volunteers on an eye-opening journey through a once-in-a-century pandemic and a devastating wildfire.

“The year 2020 has just been completely crazy,” said Erika Anderson, the shelter’s program and development manager. “It  has turned what we think we do day to day upside down.”

The onset of the COVID-19 crisis last March was traumatic for the shelter. When the county government began bleeding red ink as businesses shut down and tax revenues plunged, officials cut the shelter’s budget 10% as a rush of adoptions by working-from-home employees left a strange emptiness at the shelter nobody could have predicted.

“We knew that we were not going to shut our doors,” Anderson said. “We were just going to have to figure out how to make all of our services as accessible to the community in a safe way.”  In the initial weeks of the pandemic, the shelter’s employees continued doing their old jobs but also began branching out. At an emergency homeless shelter set up at Santa Cruz’s Veterans Memorial Building, the animal shelter’s staff was deployed to clean and sanitize the place as well as take people’s temperatures as they went in and out. Animal control officers delivered food for humans at emergency shelter sites, set up around the county to reduce overcrowding and make it easier for homeless people to socially distance.

The employees took on additional responsibilities with a 7.5% pay cut. Its executives took a 10% hit. But many shelter employees seemed grateful that they still had full-time jobs.

The shelter depends on county and municipal funding for a large portion of its services such as animal control, licensing, rabies vaccinations and providing housing for stray and unwanted animals. But programs such as spay and neuter clinics, educational initiatives and pop-up pet clinics are privately funded through thousands of independent donors, many of whom were suddenly out of a job or incurring financial hardships themselves because of COVID-19.

The shelter heavily depends on its 400-strong army of volunteers for its day-to-day operations. But strict new rules at the beginning of the pandemic prevented volunteers from entering the shelter. Their absence meant they were unable to do jobs such as cleaning kennels and socializing the animals.

So instead, the volunteers stocked the free pet-food pantry on the shelter property as well as food pantries for hungry people around the county. With the shelter’s outreach van, dubbed the “animobile,” volunteers delivered donated pet food to help pet owners who had lost their jobs because of the pandemic and were in a financial freefall.

“I can’t say enough about our volunteers,” Anderson said. “They are lifesavers.”

After the initial lockdown, the shelter staff held socially distant meetings with county officials to define what was essential to the shelter’s mission and figure out how it could proceed safely. So eventually the volunteers were allowed to return to work at the shelter by following appropriate safety measures.

Various educational and promotional programs, however, had to be canceled, including the shelter’s popular summer camp, where wildlife experts educate kids about animals and promote respect and empathy for all creatures.

Then, in late August, came the inferno.

The CZU Lightning Complex fires displaced thousands of animals as tens of thousands of county residents were evacuated and flames destroyed 925 homes in the county, leaving many mountain residents and their pets without homes.

Approximately 500 of the evacuated pets were housed at the Santa Cruz and Watsonville shelters. The latter had been closed to the public when the pandemic hit, but it proved to be a valuable place to house animals when the Santa Cruz shelter ran out of space.

All told, the shelter during the August fire had to arrange accommodations for 4,500 animals, compared with about 5,000 in an entire year during normal times.

When the doors to the shelter opened every morning, “you just didn’t know what was going to happen,” said Ben Lomond resident Nancie Newby, a longtime shelter volunteer.

Many of those who dropped off their animals at the shelter had lost their homes in the blaze. As a result, some of those animals were at the shelter for months in the wildfire’s wake.

Newby was part of a team of volunteers nicknamed “Tami’s Team,” named after Tami McConnell, the staff member who organized the task force. The group of roughly a dozen handpicked volunteers was responsible for socializing the evacuated dogs by taking them for walks and playing with them.

“These dogs had never been in a kennel before,” Newby said. “We wanted them to feel as much love as we could give them.”

While shelter employees and volunteers were evacuating animals during the fire, they constantly kept an eye out for things that weren’t quite right. The equine evacuation team came across two horses and a mule suffering from extreme neglect. The team was able to rescue the three animals and place them in good homes.

Despite a drop in donations in the early months of the pandemic, the shelter saw an influx of donations of both cash and pet supplies during the wildfire.

Many volunteers and staff practically lived at the shelter, often working into the night.

“For two weeks, I was there volunteering almost every day,” said Garrett Smart, Anderson’s husband. “I was creating new spaces for families of chickens to live so that we can keep them together.”

Today, the shelter is once again back to its normal pre-fire ebb and flow. And many employees and volunteers are learning to embrace some of the positive changes the pandemic has wrought.

Just one example: The continued high demand for adoptable dogs and cats, coupled with having fewer shelter animals to care for, gives the shelter more time to vet potential adopters.

“It has really allowed us to focus a little bit more on matchmaking,” Anderson said.

The shelter has also been able to put together an online curriculum to train and educate potential volunteers and foster parents for pets, something the shelter plans to keep after  pandemic restrictions ease in the upcoming months.

What else did the shelter learn?

To be more flexible and accessible, Anderson said. While challenging, the year forced the shelter to reimagine the way it operates in “what has been an extraordinarily difficult year for all of us.”

“Despite all the negativity and the craziness,” she said, “I think we’re better for it.”